Men of the Economic and Financial Crimes Commission have apprehended and arraigned three internet fraudsters in Ibadan. 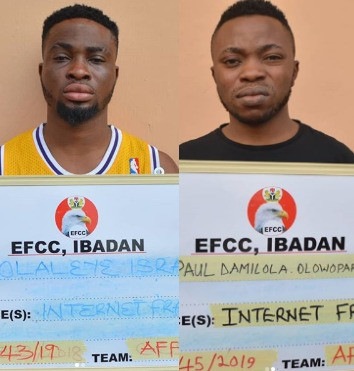 The suspects
The Ibadan Zonal Office of the Economic and Financial Crimes Commission, EFCC, today, March 1, 2019 arraigned Bamidele Adegboyega (a.k.a Romona Clifford); Paul Damilola Olowoparija (a.k.a  Kathleen Sandra Samuel and Olaleye Isreal (a.k.a Sandra Samuel Precious). They were arraigned before Hon. Justice P. I. Ajoko of the Federal High Court of Oyo State, sitting in Ibadan on separate charges bordering on obtaining money by false pretense, possession of fraudulent documents, sending of pornographic and indecent pictures and money laundering.
A statement from the antigraft agency says the defendants took their pleas separately. Bamidele pleaded not guilty to a three-count charge, preferred against him. Similarly, Paul and Olaleye pleaded not guilty to a four-count charge, and seven-count charge, levelled against them respectively.
Prosecuting counsel, Mabas Mabur applied for a trial date and for the remand of the defendants in prison custody.
In his pronouncements, Justice Ajoko adjourned the case of first defendant to March 11, 2019 for hearing of bail application and April 5, 2019 for trial. In the same vein, he adjourned the case of the second defendant to March 13, 2019 for the hearing of the bail application and April 3, 2019 for trial.
The case of the third defendant was adjourned to March 15, 2019 for bail application and trial.
The judge also ordered the three defendants to be remanded in the Oyo State Prison, Agodi pending the hearing of their bail applications.
Top Stories