Atiku hailed the PDP governorship candidates in Bauchi and Kano states, Bala Mohammed and Abba Yusuf, respectively, who he said had made great showing in both states. 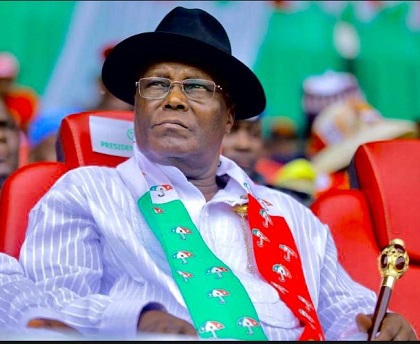 Atiku Abubakar
The presidential candidate of the Peoples Democratic Party and former Vice President of Nigeria, Atiku Abubakar, says the victory of the candidates of the PDP in both Sokoto and Benue states is an acknowledgement from Nigerians that the PDP  is the only truly national party in the country.

Atiku, in his congratulatory message to Governor Aminu Tambuwal of Sokoto State on his re-election, assured the people of the state that they had made the right decision that would see them continue on the path of peace, progress and prosperity.

“Ortom is not just a credit to the PDP, he is also an epitome of servant leadership, which all and sundry should emulate. With him again at the helm of affairs in Benue, the people of the Food Basket of the Nation can look forward to á refreshing time,” Atiku said.

He hailed the PDP governorship candidates in Bauchi and Kano states, Bala Mohammed and Abba Yusuf, respectively, who he said had made great showing in both states.

He said, “Victory is within reach. They have shown that they are men of the people and we are convinced that much good will come out of these men of enviable talents and leadership ability.”

He also congratulated the PDP and all its members, saying the party was the true bastion of democracy and should be encouraged by the victories.
Top Stories