Inside The Primary School With Only One Teacher In Rivers


The stunning story has been told of the primary school that has only one teacher in a Rivers state community. 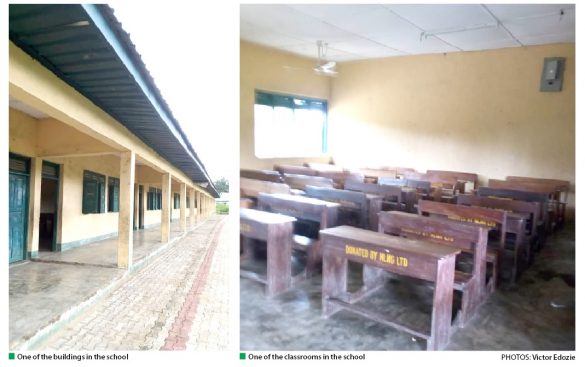 Its expansive landmass and beautiful structures qualify it to be a place of learning where pupils who are supposed to be leaders of tomorrow are nurtured, but a Rivers State Universal Primary Education (UPE) school located in the rural community of Owube in Ahoada West Local Government Area of the state is the opposite of what a modern and conventional education centre is supposed to be.
The primary school which has only one teacher and a headmistress depicts pity, neglect, rejection and abandonment.
The second phase of the United Nations (UN) Millennium Development Goals (MDGs) is to achieve Universal Primary Education (UPE), more specifically, to ensure that by 2015, children everywhere; boys and girls, will be able to complete primary education; which is vital to meeting all the other MDGs.
Another important aspect of the MDGs is to educate children and give coming generations the tools to fight poverty and prevent diseases, including malaria and AIDS.
But the UPE School, Owube, has fallen short of the MDGs objective given its insufficient teaching staff which has hampered effective academic activities.
The primary school which was established in 1976 started with five teachers in a mud house of five classrooms, a head teacher’s office and a store, and its strategic location, coupled with the number of teachers it had, attracted pupils from neighbouring communities.
Desirous to have a befitting centre of learning for their children, in 2001, the women of the community contributed money and built more structures in the school and added a six-classroom block to the existing structures.
The upgrading of the structures attracted more teachers; as five teachers and a headmaster were deployed to cater for the increasing number of pupils which had grown to about 350. A resident of the community, Chiadikaobi Franco, said, “In 2006, NLNG awarded a contract for the remodelling of the school, and befitting structures were built. After the renovation, academic activities resumed with more than eight teachers.
“However, in 2012, there was a flood incident that affected most states in Nigeria, of which Rivers was among, and of course, the school was temporarily closed.”
He said the flood which submerged the entire school reduced the number of teachers to three, and that because of the resultant insecurity, almost all the teachers lobbied to be transferred.
He further said, “After the flood, one of the teachers didn’t return and there was no replacement. At that time, the number of teachers had reduced to three. When cultists invaded the entire Ahoada where many people were killed, the remaining two teachers left; leaving the school with only a teacher and a headmistress.”
Another resident, Gerald Ogbuka, said lack of teachers in the school forced parents to enroll their children in private schools. Ogbuka said, “If you look around, you will notice that private schools have sprung up in the community and parents are moving their children to these schools where there are enough teachers. No parent will like to send their children to a school where they will not learn. The entire structures in the school are rotting away because they are underutilised. The teachers’ quarters are wearing out because nobody occupies them. I am calling on the state government to deploy teachers to the school so as to enhance academic learning.”
Another resident explained that, “UPE Primary School, Owube, is one of the best schools in the entire Ahoada and its environs. The school was the dream of every parent to send their children. If you go round the entire school premises, you will see its beautiful landscaping and structures. The school had over 350 pupils, but problem started after the 2012 flood that ravaged the entire Ahoada. The school was shut down and most parents withdrew their children. When the flood subsided and the school reconvened, the problem of insecurity set in and teachers in the school lobbied for transfer and they left; leaving a teacher and a headmistress.”
He said only a teacher could not take care for about 90 pupils and so called on the state government to deploy more teachers to the school. A parent, Magnus Okpoko, said ‘‘two of my children were in that school before but I had to withdraw them and take them to another school because they were not learning anything. The school does not have enough teachers. How can a school that has more than 80 pupils have only one teacher.”
Another parent, Monica Ekpeye, said ‘‘I had to withdraw my little daughter from the school because the school does not have enough teachers to teach children. I have enrolled her in a private school where she is doing very well. The Rivers State government should find out what is really happening in the school and do something urgent to ensure that enough teachers are deployed to the school.”
The Permanent Secretary in the Rivers State Ministry of Education, Mr. Reginald Hart, denied that the school had only a teacher.
Mr. Hart said the state government had done so much through the UBE, saying all government-owned schools in the state had enough teachers, and added that teachers deployed to the school might have absconded and abandoned their duty post.
***
Source: Daily Trust
Top Stories