A man has been stabbed to death in a Lagos community during a fight over the winner of ram betting. 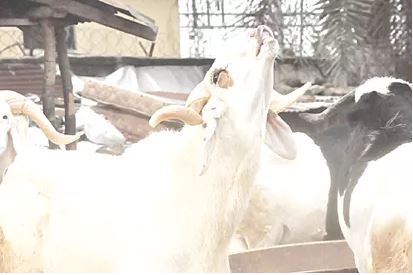 File photo
Vanguard reports that life was snuffed out of a 25-year-old man yesterday, at Ishawo area of Lagos, during a fight over the winner of ram betting.
Youths in some parts of the country engage in ram betting, whereby two rams are made to fight, at the end of which owner of the winning ram goes home with the amount placed as bet.
Vanguard gathered that things went sour yesterday, following accusation of cheat on one of the parties.
This resulted in a verbal confrontation between the deceased, Yusuf Isiaka and one Segun Banji. It degenerated into a fight during which the latter was alleged to have stabbed the former in the left side of his chest, resulting to his death.
An eye witness, Biola Idowu, said, “Banjo immediately took to his heels when he realized the magnitude of his deed. Perhaps if Isiaka was rushed to the hospital on time, he might have survived.

“Policemen from Owutu who were contacted by an executive of the Oke Oko Community Development Area, arrived the scene.

“Officials of the Lagos State Neighbourhood Security Corps, LNSC conducted a search around, thereby leading to the arrest of the fleeing suspect, who resides at 15 Araromi street Oke Oko.”
They took the suspect in their patrol van. But they were stopped by some soldiers at a Military base within the area who suggested that the suspect should be kept in their base until the Police arrived to take him.
The suggestion was to avoid any likely attack on the LNSC’s officials, as aggrieved friends of the deceased were threatening to avenge the death of their friend.
”The suspect was handed over to the police at their arrival”.
Policemen at Owutu confirmed the arrest, saying the suspect was likely to be transferred to the State Criminal Investigation and Intelligence Department, SCIID Yaba.
Top Stories