BBNaija: What I'll Do To Any Male Housemate Who Makes Move At Mercy - Ike


Ike alongside Tacha, Cindy and six other big Brother Naija housemates have been selected for possible eviction this week. 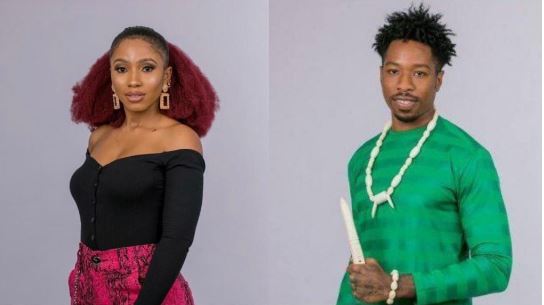 Mercy and Ike
Big Brother Naija, BBNaija housemate, Ike has threatened to deal with any male housemate that tries to get close to Mercy.
It would be recalled that Ike again on Saturday night professed his love for Mercy.
But, Mercy, also reassuring him of her love maintained that although she loves him, he needs to know that his parents love him more than she does and he has to open up his mind to love them in return.
Ike speaking with Mercy and Esther on Thursday said he would deal with anyone who tried to come close or have a relationship with Mercy if he’s evicted on Sunday.
“If I get evicted and any guy comes close to Mercy, I will run the guy down outside the house.
“There are no rules outside the house, if you do anything, when you come out, I’ll face you,” Ike said.
Ike alongside Tacha, Cindy and six other big Brother Naija, BBNaija housemates have been selected for possible eviction this week.
Top Stories