Nigerian soldiers have been caught on tape humiliating a man over allegations of theft. 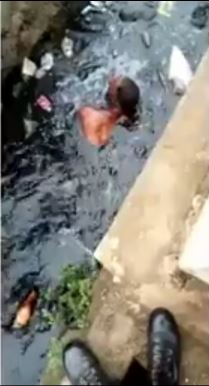 Man swimming in dirty water
A man has been given the disgrace of a lifetime after he was reportedly forced by Nigerian soldiers to swim inside a dirty gutter.
According to unconfirmed reports, the man reportedly sold N20,000 shoe from an Hausa man.
Conversation in the video suggests the man sold the shoe of N20,000 for N2,000, hence forced to swim inside a disgusting gutter.
Watch video below:
Top Stories