Newborn Baby Suffers Burns Immediately After Being Born In Calabar...You Won't Believe How It Happened (Video)


A baby has been reported to have suffered burns shortly after being born in a traditional delivery home in Calabar. 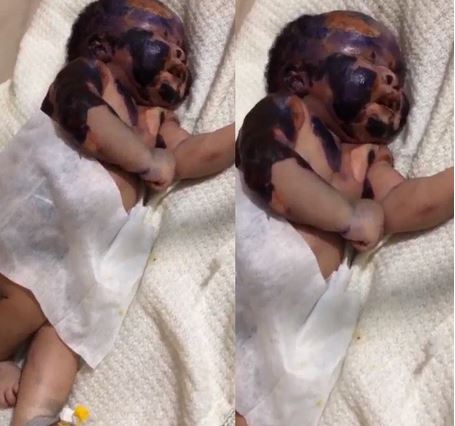 A baby who had just been born, has suffered burns in Calabar, reports have shown.

The newborn baby suffered burns after a lantern fell just after the child's delivery in Calabar, Cross River state.

According to Big Beezy, an Instagram user who shared the story, the mother of the child, identified as Mrs Okon Daniel, went to a "traditional delivery home" to have her child due to lack of funds to go to a proper hospital.

There was no power supply at the time of delivery, being on Saturday, November 14, 2020, so a lantern was used to illuminate the room.

Unfortunately, as the baby was making its entrance, the lantern fell and caught fire, burning the child.

At the time the video was recorded, the baby was already 4 days old and had been transferred to a different hospital in Calabar for better care.

Below is a video of the child.