A Nigerian actor, Aremu Afolayan has hotly blasted President Buhari, Ambode and Ethiopian airlines after suffering difficulties at the airport. 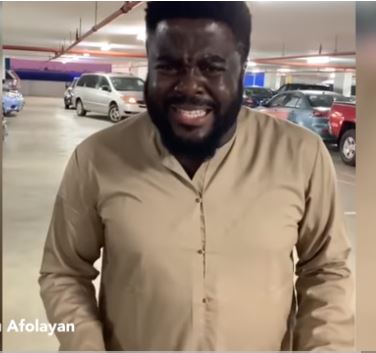 Aremu Afolayan
Nigerian actor, Aremu Afolayan, has called out President Muhammadu Buhari, Governor Akinwunmi Ambode, Ethiopian Airlines and Murtala Muhammed Airport officials for frustrating travellers.
In a video post on his social-media handles on Sunday, the Yoruba actor expressed displeasure with the "unprofessional attitude" of Immigration officials at the airport.
He questioned why immigration officials would conclude that a passport is fake without even making attempts to verify.
In the video, a visibly-angry Aremu said: “First of all, in my entire life, I have never seen a country as useless as this country in my entire life. How can I come to the airport and you are telling me to pay for my family to come into airport? You are telling me that you cannot allow my family to come in because of security [issues]?
“What security do you have in Nigeria? Tell me the security? If the bad people are going to come to this airport, won’t they destroy the airport? What security? They should fire all those useless immigration bastards or whoever they are on that door step. Why will I come to the airport with my family and I'm not able to go into the airport? It is so frustrating and alarming. When are you going to change everything? What is wrong with you people?
“My sister here is about to travel. She is not a citizen of Nigeria. Her French passport was given to her by the French embassy and you are telling me the passport is fake. How can you say a passport is fake when you can verify the passports from your f**king office? Why do you do this to Nigerians? Are we all that stupid and dumb? Is it because we didn’t go to school?
“Why will you frustrate everybody here? And you call yourself a president of a country and you cannot do anything to your country? Why are you allowing people to be frustrated? Why will I give Immigration money for crying out loud? Why will poor people come to the airport and they won’t be able to find solution to their situation? Why do you have to allow this to happen and you call yourself a f**king Buhari? Who are you? What kind of president are you? What kind of mayor of a state are you Ambode or whoever is there? Who are you for crying out loud? Why can’t you find solution to the situation of Nigeria? What is wrong with you people? Why do you cause trouble and cause somebody pain?
“Ethiopian Airlines is the most rubbish airline in the world. Why would they not pick someone and they’ve delayed and now they're asking us to pay N120,000 to change tickets.
"You are all bastards including the mayor, the president and the airline. All of you are bastards for frustrating us. We are not animals. Look at the airport you built; it is not even up to a train station. There is no A/C in the elevator. Nothing. Shame on you and shame on all your government. Shame on all the people you’ve governed and cannot talk. Aye gbogbo yin o ni da.”
Watch the video below:
Top Stories