Nigeria's number one man, President Muhammadu Buhari has been booed by lawmakers while presenting the appropriation bill. 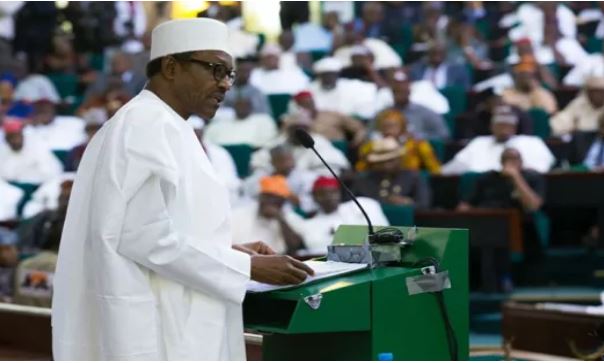 President Muhamamdu Buhari
President Muhammadu Buhari was given a rough welcome by a section of the joint session of the National Assembly on Wednesday as he gave the speech that was expected to culminate in the presentation of the 2019 appropriation bill.
Buhari entered the National Assembly at about 12:40pm and immediately set about the business of the day.
However, he was soon shouted down with screams of “nooooo”, “nooooo”, “lieessss” when he started talking about the strides of his administration.
The shout was loudest when Buhari said “the economy has recovered from recession”, and that Boko Haram had been degraded in the North-East.
At some point, the President got visibly angry, and briefly abandoned his prepared speech, and told the lawmakers: “Distinguished members, let us conduct ourselves properly. The world is watching us; we are supposed to be above this.”
This brought some decorum, but only for a while as the shouts resumed when Buhari spoke about the anti-corruption campaign of his government.
As the speech wore on, though, his supporters made themselves heard as well, standing, clapping and cheering as he reeled off figures of infrastructural projects.
Top Stories