The wife of the murdered chairman of Credit Switch Technology, Ope Bademosi has talked about how her husband was killed by their cook. 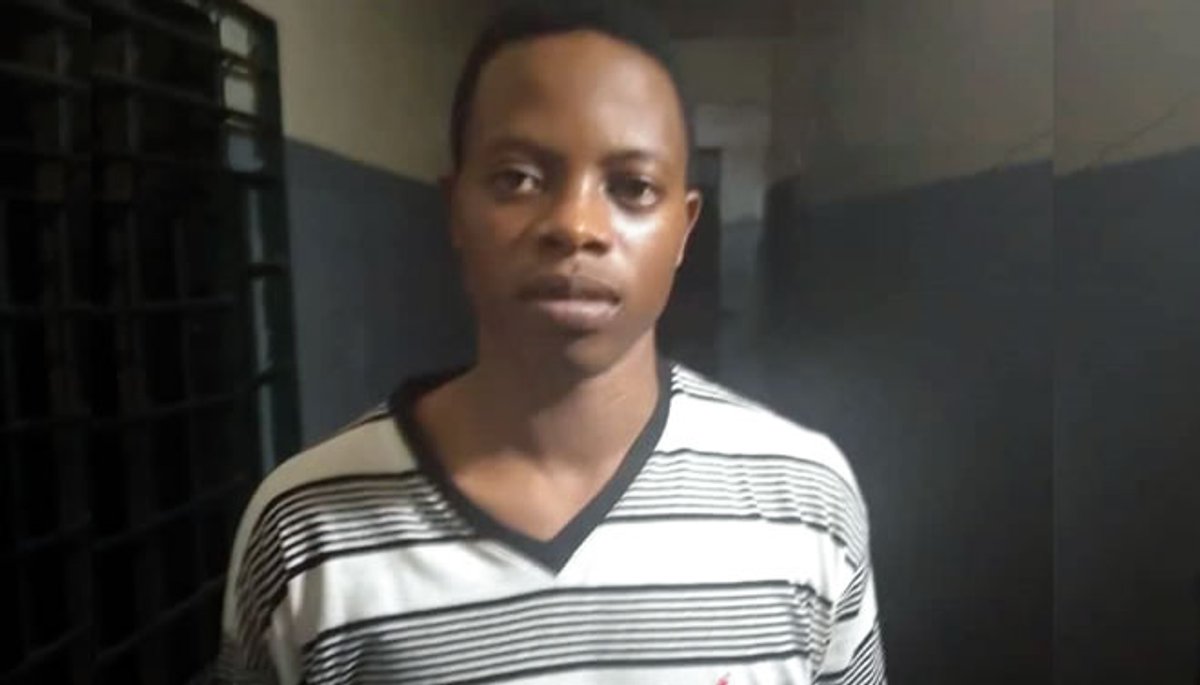 The cook, Sunday Anani
According to a report by Punch Metro, the wife of the late Chairman of Credit Switch Technology, Chief Ope Bademosi, who was murdered at his Parkview Estate residence in the Ikoyi area of Lagos State, on Tuesday narrated to a Lagos State High Court in Igbosere how her husband was allegedly murdered by their 22-year-old Togolese cook, Sunday Anani.
The widow, Ebunoluwa , told the court that she had gone to Polaris Bank at the Falomo area to transfer money to Dubai and China when the deceased angrily called her, asking why the defendant was knocking at his room’s door.
She added that by the time she came back, she saw blood flowing from her husband’s room.
Anani was alleged by the police to have stabbed his boss with a knife on Wednesday, October 31, 2018, three days after he was employed.
It was alleged that the suspect fled the home with some valuables belonging to his boss after committing the crime.
Anani was arrested by the Ondo State Police Command around 9.30am on November 2, 2018, in the Yaba area of Ondo town.
The suspect, who denied involvement in the murder, claimed that he and the victim were attacked by robbers, who demanded money from his boss.
He claimed that when the assailants were not satisfied with what they got, they killed the Credit Switch boss.
The cook is facing two counts of murder and armed robbery preferred against him by the Lagos State Government.
Ebunoluwa, at Tuesday’s proceedings, while being led in evidence by the Director of Public Prosecutions, Ms Titilayo Shitta-Bey, told the court that before she left for the bank, she had told the defendant that her husband was sleeping and that he should not be disturbed.
She said, “I left the bank and drove through Bourdillon and went home; the security man opened the gate and I drove in and went through the kitchen’s door to gain access into the building, but it was locked. I knocked several times, calling on the defendant, but he didn’t come to open the door.
“While waiting, I got a call from my sister in Ibadan and we spoke for about six minutes. I called my husband but the phone was picked and nobody responded. I called him twice and the same thing happened; so, I went downstairs and decided to pass through the front door, thinking that if I got there, there would be somebody at the door, but by the time I got to the front door, it was left ajar.
“I entered the apartment and saw blood flowing out from my husband’s bedroom. I couldn’t enter the bedroom, but the door was a bit opened and I saw his body lying on the floor, so I ran out of the building and started screaming and calling neighbours for help.”
The widow added that she inquired the whereabouts of the cook from the security man, who told her that the defendant informed him that he was sent on an errand.
She added that she passed out when she was informed by her neighbours, who went into the bedroom, that her husband was dead.
Ebunoluwa added that 10 days after the incident, she discovered that her husband’s five wristwatches and phone had been stolen by the defendant.
The presiding judge, Justice Mobolanle Okikiolu-Ighile, adjourned the case till June 11 for the continuation of trial.
Earlier the defendant’s counsel and Director of the Office of the Public Defender, Olayinka Adeyemi, informed the court that they would be opting for a plea bargain.
Top Stories