Revealed At Last: How Major Nzeogwu Who Plotted Nigeria's First Coup In 1966, Died


Family members have opened up on the life and times of Major Chukwuma Kaduna Nzeogwu who led Nigeria's first military coup. 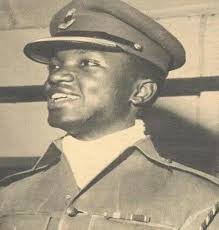 Major Nzeogwu
From his existing biography, Chukwuma can be said to be an elemental figure (Ogbanje – one with a short breezy life span) do  you share in that belief?
Yes, it is true. He always told us clearly, and from accounts from our elder sister, it was clear that he came to the world with a mission.  Our late father used to tell his friend, Olusegun Obasanjo who was married to pressurize his friend, Chukwuma, to get married too. Several times he told him “you’re married. Please let your friend get married too”. My brother’s standard response was always,  “ I am not interested in that, because  I won’t live long. I have come here to do what I want to do and then move away. So, there is no point getting married and leaving behind a widow or orphan to suffer’. He was focused on what he said he came to the world to do and did not want any distraction.
So, he had a premonition that he was going to die young?
Yes.
In your family lineage or genealogy, can you recall anyone with that kind of streak that he probably took after? Did he reincarnate anyone as traditionalists believe?
Well, I don’t know. Since I was born, I never heard from even our elders that he took after someone. He was a different kind of person.
After so many years of his death, how do you remember him?
We always remember him in our prayers asking God to accept him in his bosom, since he was the one that sent him on the mission. We believe that since he came to achieve what he wanted to achieve and had gone away, God should give him eternal rest. We have left him in the hands of God. He sent him here and called him back.
He didn’t marry. But have you heard stories of his having a girlfriend or child anywhere?