A helicopter has caused some excitement after it was seen coming to pick a VIP who was stuck in traffic. 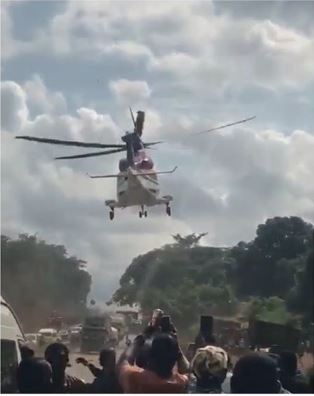 A video has shown the moment a VIP was picked up from the road by a helicopter after he got trapped in traffic.
In the video, observers and other commuters, who were stuck in the same traffic, are seen getting really excited upon seeing the helicopter and came out to take photos of it with their phones.
According to reports, the incident happened yesterday, Sunday, June 23, 2019. The identity of the person who was picked has not been revealed.
After picking up the VIP, the helicopter lingered for a while before charging into the air and moving away.
Watch the video below: