A court in Lagos state has handed a judgement to a Togolese cook who murdered his own boss. 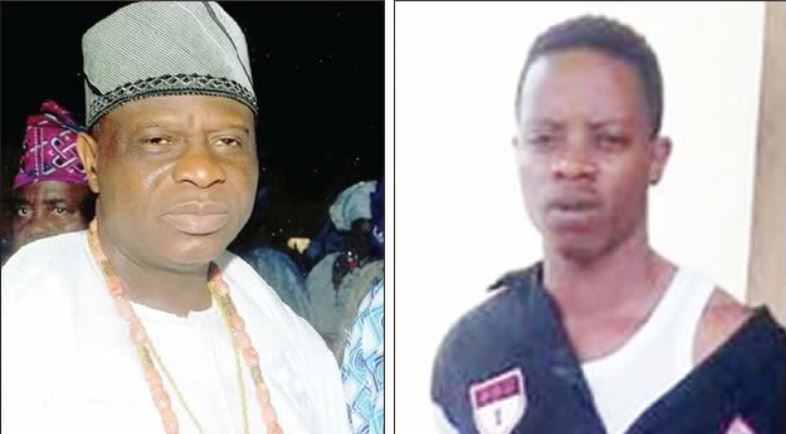 Late Chief Ope and the cook who killed him
A Lagos State High Court in Igbosere, on Tuesday, sentenced 22-year-old Togolese cook, Sunday Anani, to life imprisonment for killing the Chairman of Credit Switch Technology, Chief Ope Bademosi, at his Parkview Estate residence in the Ikoyi area of the state, Punch has reported.
It was gathered that Anani was convicted by Justice Mobolanle Okikiolu-Ighile after he pleaded guilty to one count of voluntary manslaughter.
Anani had stabbed his boss with a knife on Wednesday, October 31, 2018, three days after he was employed.
Anani, who fled the home with some valuables belonging to his boss after committing the crime, was arrested by the Ondo State Police Command around 9.30am on November 2, 2018, in the Yaba area of Ondo town.
The suspect, who initially denied involvement in the murder, claimed that he and the victim were attacked by armed robbers, who demanded money from Bademosi.
He claimed that when the assailants were not satisfied with what they got, they killed the Credit Switch boss.
However, Anani, who later confessed to the court that he stabbed Bademosi while trying to rob him, admitted that he was the person caught on the Closed Circuit Television footage fleeing the premises after the murder.
He struck a plea bargain deal with the Lagos State Government by admitting the lesser charge of manslaughter soon after the trial commenced.
Anani’s counsel and the Director, Office of the Public Defender, Mrs Adenrera Adeyemi, urged the court to temper justice with mercy.
She said, “The defendant is a young man and he is remorseful about what he has done. He is a first-time offender; there is no evidence that he committed any crime before this. Our humble application is to urge your lordship to grant a sentence of years certain.

“However, if my lordship is mindful of upholding what we have agreed in the plea bargain, we will accept the sentence therein.”
Opposing the plea to grant sentence of certain years to the convict, the Lagos State Director of Public Prosecutions, Titilayo Shitta-Bey, said, “We urge this court to grant the maximum sentence for the offence of voluntary manslaughter act as charged, because there were some special aggravating circumstances surrounding the case, such as breach of trust.
“The defendant was employed in the home of his boss, entrusted with a high level of responsibility as a cook but barely three days after resumption of duty, the defendant cut short the life of a man who gave him a new lease of life, depriving him the privilege of enjoying life with his wife and children, which the deceased was entitled to.
“Judicial notice must be taken of the fact that this act of violence by domestic employees against their employers is becoming rampant. The sentence must reflect that this conduct is unacceptable to our society; we must send the message to others of like minds like the defendant.”
Delivering her judgment, Justice Okikiolu-Ighile said, “It is annoying that a young man like this would involve himself in this kind of crime. What did he hope to achieve in life by involving himself in this kind of crime? It is very painful that a young man, whom the family of Bademosi welcomed in their home as a cook, ended up causing so much havoc and endless pain.
“It is even more painful that the defendant had no motive of working but came into the house with a criminal intention to steal, to kill and to destroy. The defendant admitted ‘I killed him.’ This was an innocent and unsuspecting family.
“Sunday Adefonou Anani is hereby sentenced to life imprisonment. The term of imprisonment shall commence from today (Tuesday) June 25, 2019.”
Top Stories