Brazil now await the winner of Wednesday's other semifinal between Chile and Peru to determine their opponent for the final in Rio at the Maracana on July 7. 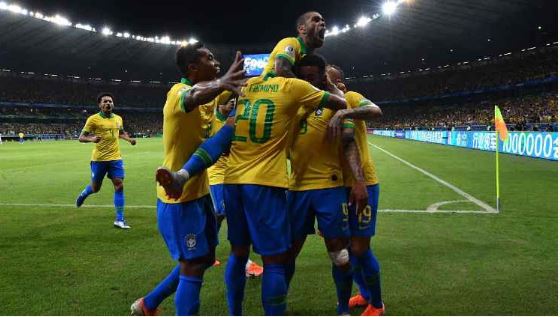 File Photo
Goals from Gabriel Jesus and Roberto Firmino saw Brazil to a 2-0 win over Argentina in the Copa America semifinals on Tuesday night as the host nation booked a spot in their first Copa final since 2007.
The result means that Argentina's Lionel Messi is still without a trophy during his international career with La Albiceleste despite having playing in three finals for his country.
Brazil, who have won every Copa America hosted on their home soil, scored first when Jesus turned home Firmino's low cross after some nice build-up play to make it 1- 0.
Sergio Aguero nearly got Argentina back on level terms on the half-hour, but his looping header from a Messi free kick hit off the crossbar after going over the outstretched arms of Alisson in the Brazil goal.
Down 1-0 at the start of the second half, Argentina were able to force the action a little more than in the first half and came closest to an equaliser on 66 minutes when Messi forced a fine save from Alisson.
Soon after, Brazil doubled their lead when Jesus set up Firmino for tap in after a mazy run from midfield in which he held off several defenders before squaring to the Liverpool striker.
Brazil now await the winner of Wednesday's other semifinal between Chile and Peru to determine their opponent for the final in Rio at the Maracana on July 7.
Top Stories