UPDATE: Family Refutes Claims That Makeup Artist, Deborah Tushima Was Poisoned At Her Birthday Over An IPhone 11
Recent Stories

How I Escaped Being R*ped On Lagos Streets - Beautiful Nigerian Singer, Debstar Opens Up


A beautiful Nigerian singer, Debstar has opened up about how she was almost r*ped on Lagos streets. 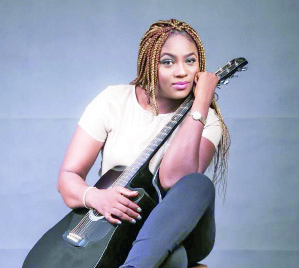 Debstar
An evening with Deborah Olumese aka Debstar, leader of Tramela Band, which thrills every Friday and Sunday at popular entertainment hangout, O’Jez Pool Side in Lagos, is an experience to look forward to.

From 7pm when she mounts the stage, lovers of live music are treated to a plethora of both local and foreign new/old skool vibes. Having played for the high and mighty, Debstar’s band is today one of the most sought after across the Lagos metropolis.

In this chat, she traces her trajectory to musical prominence. Enjoy it.

How did music start for you?

I started music from my mother’s womb. At age three, I was already singing in the church choir. Music is something I am very passionate about. Music has always been a part of me. I came into music with the help of my elder sister’s friend, a keyboardist and producer. He introduced me to a musician who was recording in his studio at Lagos in those days. I was to do backup for him, which I did exceedingly well. That was how he introduced me to the late Mike Obi. I sang with Mike Obi for some months and left. The same guy introduced me to another band owner and ever since, I have never looked back.

Growing up, I had so many influences from gospel and contemporary musicians. As a child, I used to admire Tosin Jegede and wished to sing and be popular like her, and when I started getting mature, Kefee, Plantation Boiz and many other acts influenced me a lot.

Did you get your parents’ support?

Wow! My mom was and is still my number one fan. When I was in secondary school, she took me to a musician in my area in Benin City, Edo State. The artiste is called SKO. My mother pleaded with him to help my career in any way he could. My elder sister was my backbone; she was the one who took me to her friend that introduced me to a live band. I must say that my family has always been in support of my musical career; they have been amazing!

What were your initial challenges?

My challenges, hmmm… I really didn’t have challenges except for my fears; fear of not being good enough, fear of not being accepted, fear of this and fear of that. First was how to score songs and keep the lyrics locked in my memory, and you know, then there was no internet, so you had to put the song on repeat with the cassette playing over and over so that you got the lyrics right. It was tough. Second was mobility; this was one of the greatest challenges I ever faced. After performing, you had to go home and there were no buses or bikes because it was late and we couldn’t afford cabs. The only choice you had was to sleep at the venue, but sometimes, bar owners didn’t want you hanging around and sleeping in their premises once your performance was over. So you had to go home whether you liked it or not, and that exposed you to a lot of danger. My brother, it was hard especially for those of us who played on the (Lagos) Island. Relief later came when Why Not nightclub opened on the (Lagos) Island. We would go there; all of us, different musicians from different bands, we would meet there and then sleep on the streets. That place became our meeting point, our safe haven. Sometimes, police would raid and pack us to the station. That continued until the club was finally shut down. It was fun sometimes and at other times, it was a dilemma, a nightmare.

How was it setting up your own band?

Starting my own band was quite a challenge. I was afraid but I had to tell myself the truth, ‘fear no go put food for my table’. I was afraid of failing, I was afraid of mockery in case I failed. I was afraid of what people would say about a lady leading a band, I was afraid of musicians disappointing me when I needed them the most. I was even afraid of the air I breathed. It wasn’t easy to overcome my fear but at the end, I confronted my demons. I told myself ‘if some ladies in the industry could do it, why not me?’ My band started in 2012. We are seven-years-old now and still going stronger. My band started after I got a call from Engr. Bolaji Gaza Fashola whom I call ‘my father’. He said ‘Debby, you told me you’re a musician’. I said ‘yes daddy’. And he said, ‘oya come and play at my daughter’s wedding’. I was excited and quickly organised some guys and we went to play at the event. From there, Alhaja Bintu Tinubu saw me and took me under her wings; she gave me my first half a million naira. I was overwhelmed! I could not believe my eyes. God will continue to bless her for me. The woman became my support, my pillar and one that kept pushing me. In fact, I owe the success of my band to God and these two angels He sent my way.

Did you ever experience sexual harassment and if yes, how did you handle it?

Fortunately for me, I never experienced anything of the sort. My brother, it was just God. Those days, I would trek from Allen Avenue, Ikeja to Ogba in the night because there were no busses or bikes to take me home. Sometimes, it was only me on the road and I would be afraid but singing Christian songs to give me confidence, and it worked. There were days when I would get to Ogba bus stop and those ‘agberos’ (touts) would be shouting at me, asking where I was coming from at that time of the night. They would say ‘this one wey you dey shake your small nyansh up and down by this time, you nor know say dem dey rape girls for here? In fact, dem just rape one girl finish now now’. So, it was horrible but what could one do? Hustle must continue. Looking back now, I thank God for everything. He saved me from being raped by those touts. It could have been a different story.

You have a large music repertoire, ranging from disco to R&B, hip hop to reggae. Your knowledge of old skool music including juju and fuji is amazing. How do you keep up with the new musical trends?

People say ‘practice makes perfect’. I have been in this business for long and I am now so used to it. It is now a part of me and I am a part of it. Music and I are interwoven. In fact, with the advent of Internet, it is now easy to learn songs. If you want lyrics, ask Google; if you want songs, download. Life is good now, I must confess.

What has been your happiest moment as a singer?

My happiest moments are plenty, and one is whenever a client is satisfied with my performance. Another is when a client doesn’t haggle the price, and three, when there is no disappointment from my colleagues. And finally, my happiest moment is when I get bank alerts! My brother, no happiness passes that one (laughter).

And what of your saddest moments?

It’s when musical instruments malfunction in the middle of a ‘better groove’. That is when you know what sadness is. Or, when an instrumentalist tells you ‘I’m almost there’ and the next three hours you still haven’t seen him; that is when you experience proper sadness. And yes, when you finish playing with all your might and the client refuses to honour the agreement; this is the saddest of them all (laughter).

Tell us about the album you are working on?

I don’t have an album yet, for reasons beyond my own understanding. I have worked on three songs before but didn’t push them. But something is cooking now, wait for it.

How do you handle male fans?

You don’t drive them away but become their friend. Some of them can be unbearable but what do you do?

What has been the most embarrassing thing a fan did to you?

I was singing and a guy grabbed and squeezed my bum like he was pressing bread. That got me really furious, and the way I shouted at him was like hell! I didn’t see him for months, but when he came back, we became friends and he never tried it again.

No, I am not in any relationship for now. I am single.

Will you drop your music career for marriage?

Yes, I can. I have seen great women lay down their careers for family sake. I pray my (future) husband and children support my musical career.

Tell us about your ideal man and what are your dreams?

My ideal man is a strong willed man, one with the fear of God. He must be intelligent, understand mathematics because I don’t. He must be respectful, romantic and loving; that is my kind of man. I dream to be great at what I do, have a strong legacy and have a family of mine. I also dream of having a Foundation that will cater to old people, people that cannot take care of themselves.
***
Source: Sun News
Top Stories