World famous football star, Lionel Messi has been slammed with a match ban and a $1,500 fine by South American soccer's governing body. 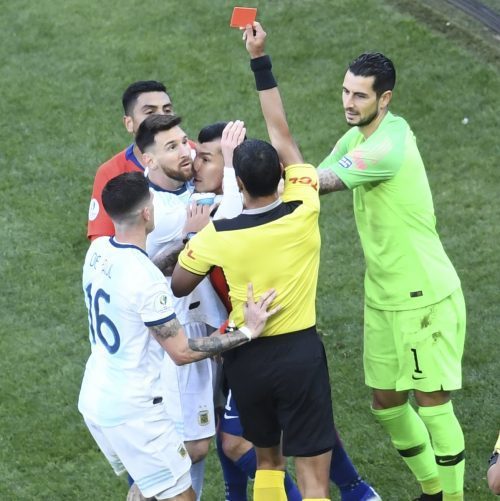 Messi was shown a red card
Lionel Messi has been suspended from Argentina's first qualifying march for the 2022 World Cup and fined $1,500 (£1,200) by South American soccer's governing body, SkySports reports.
CONMEBOL said its decision comes after Messi was sent off during Argentina's 2-1 win over Chile in the third-place match of the Copa America.
Messi was red carded in the 37th minute after clashing with Chile's Gary Medel, who was also dismissed.
South American qualifying gets underway in March.
No reference was made to Messi's recent criticism of CONMEBOL after he claimed there was corruption in the tournament and that Argentina had been harshly treated.

Messi later apologised to the organisation for his comments.
Top Stories