The story has been told of how many escaped death by the whiskers after a popular hotel collapsed in Abakaliki. 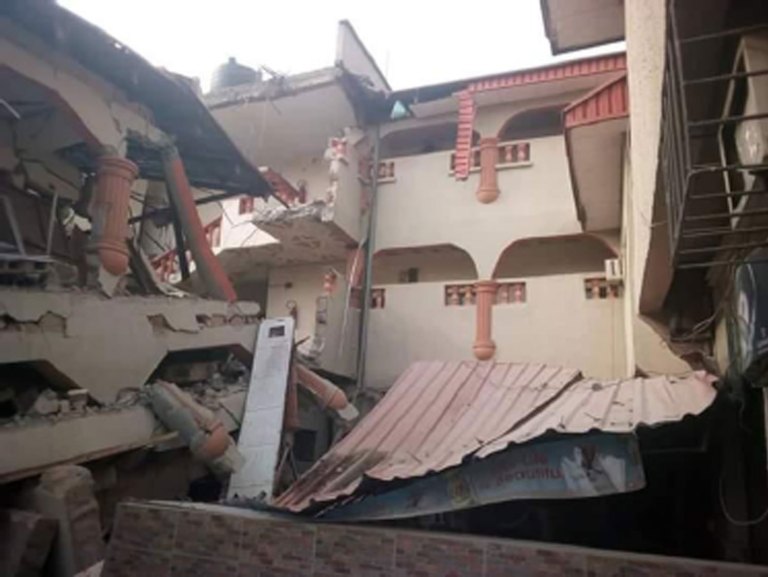 The collapsed hotel
According to Vanguard, several days after a section of a popular hotel in Abakaliki, Metro-View Hotel, collapsed to the shock of both customers and passersby within the metropolis, the management of the hotel is still trying to come to terms with the development.
Although the hotel collapsed while activities were going on within the hotel, there was  no casuality and nobody was trapped  under the debris of the collapsed building.

The hotel is located at Presco junction Abakaliki near the Presco campus of Ebonyi State University.

When South-East Voice, SEV, visited the hotel, the main gate of the hotel was still locked barring visitors and customers from gaining entry to the hotel as passersby were seen in groups discussing the unfortunate incident.

It was gathered that the section of the hotel that collapsed was under intense renovation before the incident.

The collapased section is located near the hall often used by customers for Church programmes, weddings and other social activities.

No fewer than 60 persons escaped death in the collapsed hotel.

A member of the hotel management, Chief Autsine Orji  who spoke to journalists on behalf of the company said they had noticed a crack on some of the pillars holding the building and they immediately cordoned off the side of building and started renovations, adding that it was in the process of the renovation that the building collapsed.

Orji said those who lodged in the hotel were outside the building for a seminar when the incident happened, stressing that no life was lost.

He said: “We had noticed a crack on one of the pillars holding the building. That was few days ago. We quickly evacuated our guests  and cordoned off the wing,  and we started the renovations. It was as the renovations were going on that the building caved in. We have about 18 rooms from the wing that collapsed and no life was lost.”

Ejem thanked God for saving the lives of over 60 guests who were outside the building when the incident happened.

He later ordered the closure of   the hotel, adding that it would remain sealed pending investigation by the government.

He said: “About 7pm last Wednesday, we were called that this hotel has collapsed. We immediately sent our men to rescue those who might be trapped and for assessment of damages. This morning, I am here to see for myself .The fortunate thing is that it happened when the occupants were having seminar outside the hotel. So, we thank God that no life was lost. From the look of things, this building has no plan and recognition of our office. We have always advised people who want to build to consult our office for guideline to avoid risking people’s lives. As government, we are going to seal this hotel pending investigations.“

SEV gathered that the hotel was commissioned on the 28th of May 2005 by former Minister of Culture and Tourism, Ambassador Frank Nchita Ogbuewu.

In an interview with the former state chairman of the Council for the Regulation of Engineering in Nigeria, COREN, Engr. Nwali Etchie said that the council will investigate the collapse and come out with the report.

It was further gathered that the owner of the hotel has been arrested by the police.
Top Stories