The Ondo State Governor has berated members of the state House of Assembly over claims that they are no longer safe sitting at the hallowed chamber. 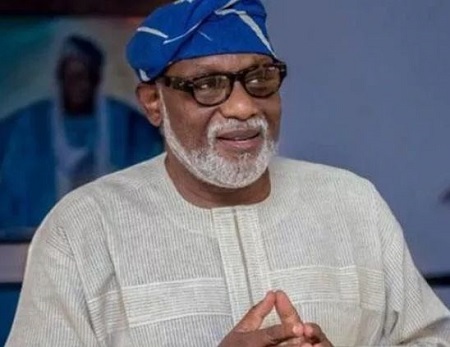 Rotimi Akeredolu
Rotimi Akeredolu, governor of Ondo state, has dismissed the reports that a snake disrupted the plenary of the state house of assembly.

Addressing reporters when he visited the assembly this weekend, Akeredolu accused the lawmakers of attempting to blackmail him and his government.

He asked the lawmakers the efforts they made to maintain the complex and make it inhabitable.

“All I have come to do is to verify what happened and I have seen is that there’s an attempt to blackmail this government. We won’t take it,” he said.

“I made sure that the speaker and most of the principal officers were here and I have heard from them in order to know what exactly happened. They have told us that no snake fell here. They were not sitting when the ceiling came down, they only met the ceiling down.

“There’s an attempt to blackmail the government and I don’t believe that is the best approach. This (legislature) is an arm of government; they have their votes and the ones they are entitled to is the ones we give them. This place is termite-infested and certainly the termites have been dwelling here for several years.

“We just spent two years and there is no way termite infestation in less than two years can cause such destruction. Something is wrong, this place has not been maintained. Members of the house have always been here, what have they done about maintenance of this place? If they have not been concerned about this place, we all have to sit down and work things out.”

The governor, however, assured the lawmakers that the government will start the renovation of the complex in due course.

Bamidele Oloyelogun, speaker of the assembly, had told reporters that a snake crept into the parliament.

“I thank God that the snake did not bite any of my honorable colleagues yesterday,” he had told journalists.
Top Stories