A 104-year-old world war veteran, Aduku has talked about his life, revealing that a man's manhood never dies in his family. 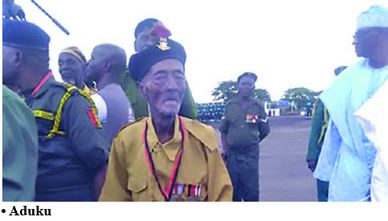 For 30 minutes, Private Adama Aduku, a 104-year-old world war veteran stood unaided at the Ikeja Cantonment parade ground. He was there to receive the Chief of Army Staff, Lieutenant General Tukur Buratai’s commendation award for keeping faith with the Nigerian Army after many years of active service.

Private Aduku came to the parade ground adorning the uniform of the Nigerian Legion, with many medals, which he said were properly earned during the Second World War in 1945.

Though 104-year-old, Aduku is still full of energy, confidence and swagger, which he said were some of the things that were fused into him during his formative stage as a soldier.

Born to a farmer in the rural town of Abejukolo-Ife  in  Omaha Local Government Area of Kogi State, Private Aduku never had any formal education, especially as  education was never a priority to his kindred; he was made to join his father’s occupation at a younger age in other to gather the required  experience necessary to succeed in life.

At age 24, Private Aduku’s life turned around when he encountered an ugly situation in his village.

He told Sunday Sun that “it all happened when I was coming back from the farm one evening, then  I saw a young man, younger  than myself, manhandling  our village head.  When I tried to find out who he was,  I was told he was  a soldier and that he was beating up our chief for refusing to carry his bag to his house, which was 10 miles away.

“The matter was reported to the District Officer, and the way the case was decided did not go down well with anybody, including myself, because the District Officer advised  the chief to obey the soldier in his own interest or face whatever consequences  that come from it.”

Private Aduku said that the decision of the D.O made him angry and sad that he made up his mind to join the Army so that he could come back to the village and also manhandle the soldier for humiliating his village head.

Apart from the fact that he will be coming back to avenge the humiliation of his village head, Aduku said he also believed then that he would be coming back to be respected and feared by his people, “and with these at the back of my mind I left my home town in 1942, few weeks after clocking 24, and headed for Makurdi, Benue State, to enlist in the then West African Frontier Force.

“My father supported my idea and gave me his blessings, but other members of my family objected, but that didn’t stop me from pursuing my dream.”

He said that joining the West African Frontier Force changed everything in his life, adding that “my thinking, my orientation and the way I look at life then, everything changed. Two years after joining the force too  I and others who enlisted in the force then  were moved to  Ibadan, Oyo State, in preparation for a trip to Egypt,  en route India and Burma, where we  joined  the Second World War battle, fighting on the side of the  British soldiers.”

He said that he remembered that journey  and all its difficulties with great memories, saying that  “because  in the course of that journey, we ran out of drinking water, so we had to rely on the water from the sea,  despite its salty nature. By the time we finally got to Egypt we were all worn out and we were kept in a camp where we waited for some days before we commenced the journey to Bombay in India and later to Calcutta to join  the war.

After the war, Private Aduku said that they were brought back to Lagos in 1946. “I returned to Nigeria and to my home town with £100; which I was paid and  it was big money at the time,” he said.

Speaking on why he left the Army to rejoin again, Aduku who had not shown any sign of tiredness, said he was faced with another challenge from his family, particularly his grandmother who had pressured him to leave the force, especially having  heard horrible stories  of women and children, who become widows and orphans, as a result of their fathers  participating in war.

Aduku said because of the love he had for his grandmother, he yielded to pressure. “I didn’t know what to do after my grandmother begged that I should leave the army. She loved me so much and was always willing to do anything to make me happy in life. I couldn’t afford to turn her down.”

Following the pressure from his grandmother, Private Aduku quit the Army  a few weeks after returning to Nigeria from the Second World War and four years after his enlistment.

He returned to Lagos to begin a new life, armed with his £100 and other priced material possessions. However, before he could settle down to begin something new, something unexpected happened. His £100  was stolen and that devastated him so much.
“That money I was paid, the £100 I was paid for participating  in the Second World War was stolen in Lagos and that changed a lot of things in me, I could not  sleep for several days; I was heartbroken and I felt sick.

“I had to fall back on other things to get my life started again,  even though it was tough and painful at the time, I have been trained to endure pains, so I had to do it.

“The following year, in 1947, I started trying to think about getting a wife and start a family, so I managed to marry a wife and was engaged in petty trading, but the trading was not what I wanted to do, and I was not getting any satisfaction from it, I wanted something more. So, I started thinking of going back to soldiering, I wanted to rejoin the army.

“So, I informed my wife of my decision to go back to the army. She didn’t say no, she didn’t express any fear, but only pleaded with me to wait until after our first child arrives before going back to the military.

“I agreed and waited till 1950 after she was delivered of the baby before going back to join the army.

“By  1950 when I rejoined the Army, my grandmother, who had pressured me to quit, had long passed on. So, for the seven years that followed, I served in various capacities in the army, bringing my experience of the war to bear at almost every point,” he said.

Again at the age of 39, Private Aduku finally decided to quit the army for good, seven years after serving his fatherland.

He said: “After leaving the army, my sister prevailed on me to come back to the village and invest in farming rather than going back to trading, I saw reasons with her and proceeded to the village where I started farm work.

“God blessed me after leaving the military; my farm became huge and I was wealthy. Since that period till now, I have been into farming and have many people working for me. I still go to the farm, but only to supervise and pay my workers.”

Despite being a strong healthy old man, Aduku said he remains virile and strong inside and have the soft and interesting side him active.

He said that he is a loving father, a reason he said all his 10 children are always around him.  He attributed his virility and longevity to his love for tea, boasting that even at his age, he is still interested in younger women.

His words: “I may be 101 years old, but inside me, especially when it comes to making a woman happy in bed, I am still strong and fresh. In my family, a man’s manhood never dies, irrespective of his age. So, I still have the energy to make love to any woman.  When I was at the parade ground, even in my hotel room, there were so many young ladies in my village that have been calling and asking when I will come back.

“But as a devout Christian, I have changed my life and do not give room for such.”

At 104, the World War II  veteran said that  one of his regrets is the inability of the Federal Government to pay his pension.

He expressed optimism that with his handshake with Vice President Yemi Osinbajo after receiving a commendation award from the Chief of Army Staff, Lieutenant General Tukur Buratai, that the pension would be paid.

He  called on the Federal Government to hasten up and pay him to enable him enjoy the fruit of his hard work before he dies.

Aduku who was one of the veterans honoured by the Chief of Army Staff, Lieutenant General Buratai told Sunday Sun that, “I have not received a single pension for one day, I am begging government that they should pay me and let me enjoy this pension before I die.”
***
Source: Sun News
Top Stories