Nigerian 'Evangelist' Caught And Beaten Up For Stealing Phones In Ibadan 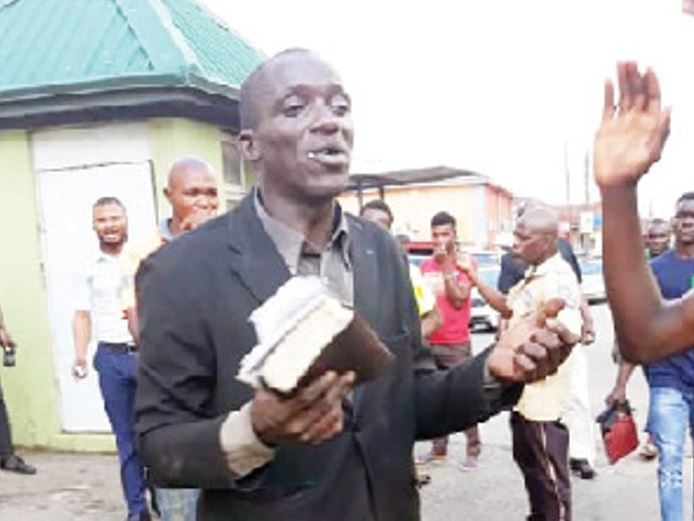 The suspect
According to a report by Punch Metro, a self-acclaimed evangelist, Mr Akinjide Durojaiye, was on Thursday beaten to a pulp for allegedly stealing two new Tecno mobile phones from a shop within the Femi Johnson Building in the Dugbe area of Ibadan, Oyo State.

The 49-year-old man, who claimed to be an evangelist at the Dominion Assembly, Ilare-Ijesa in Osun State, said he was in the shop, where mobile phones and accessories were being sold, to preach the gospel to all the people he found there.

Durojaiye claimed that he came from Ilare-Ijesa to Ibadan on an evangelisation mission, adding that the ‘spirit’ directed him to the shop to preach to the attendants and others.

He was said to have been apprehended by the attendants and other onlookers while trying to escape with the two phones valued at N70,000.

One of the shop attendants, who gave his name simply as Tunde, said he did not notice when the evangelist pilfered the phones, which were on display, saying he and the others were already carried away by his preaching.

While being chased by the attendants and neighbours, Durojaiye was said to have hidden in a store within the complex, but was located by an attendant in another shop after which he was brought out and beaten, while the phones were recovered from him.

The self-acclaimed evangelist, who clutched a copy of the Holy Bible to his chest, attributed the incident to the work of the devil, adding that his attempt to get money to treat his seven-year-old son, who is on admission in a hospital in Osun State, pushed him into committing the crime.
Durojaiye, a father of four, said the son, whose name he gave as Oluwadurosinmi, jumped down from a two-storey building in Ilare-Ijesa and was hospitalised because of the injuries he sustained.

He also claimed that his wife had divorced him and left him to take care of the children alone.

The man was later released due to the intervention of some persons in the neighbourhood, who had thronged the scene of the incident.
Top Stories