A young boy identified as Junior has reportedly ran mad after failing to use his mother for ritual. 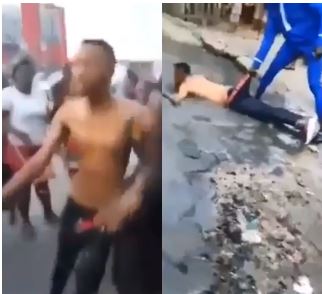 Junior after he reportedly ran mad
An internet fraudster aka yahoo boy has reportedly ran mad after failing to use his mother for money ritual.
According to eyewitnesses, the boy identified as Junior ran mad after he failed to follow the instructions given to him which included using his mother for the ritual that would eventually yield him the money.
He was heard saying in the video that he opted to use his private part, but “they” refused. He also queried why they never asked him to use his father for the money ritual process.
It is believed the incident happened in the southern part of Nigeria.
More details to come...
Watch video below:
Top Stories