Escape From Messi! The Real Coutinho Will Now Return At Bayern


The Brazilian had a frustrating time at Barcelona but will be free to express himself again after joining the Bundesliga champions on loan. 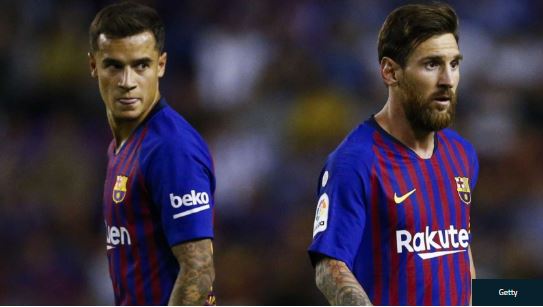 Philippe Coutinho and Lionel Messi
Philippe Coutinho's loan move from Barcelona to Bayern Munich hadn't even been finalised yet rival players were already hailing him as “the best footballer in Germany".
The Copa America winner is used to that sort of acclaim back home in Brazil and was a hero at Anfield during his time with Liverpool, but he never felt the same love during his season and a half in Catalunya.
Coutinho became Barcelona's record signing in January 2018, arriving for an initial €120 million (£105m/$136m). The Brazilian was intended to be Andres Iniesta's heir at Camp Nou – the creative force that would make chances for Lionel Messi and Luis Suarez, which he was able to do sporadically in his first few months at the club.
Ernesto Valverde deployed him on the wing in a 4-2-2-2 approach, with Ousmane Dembele often on the other flank supporting Messi and Suarez. With two attacking players in the middle, Coutinho was often forced to stay wide rather than cut inside onto his stronger foot, which had been a trademark of his time at Liverpool.
His best successes came in a 4-3-3 system, even bagging a hat-trick in Barcelona's penultimate game of the 2017-18 campaign when Messi had been rested. A week later, the Argentine was left out again and Coutinho scored the only goal of the game against Real Sociedad, dribbling through the middle before curling the ball into the corner with a beautiful right-footed finish.
Iniesta's departure last summer saw Valverde retain the 4-3-3, but Coutinho was initially pushed further back to allow
Messi to play in the attacking trio alongside Suarez and Dembele. When he was finally given a start on the left wing, Coutinho's form improved with goals against Sevilla and Real Madrid. He opened the scoring in the famous 5-1 Clasico thumping of Real Madrid – which Messi watched from the stands – while Suarez bagged a hat-trick in a tremendous team performance.
However, these performances were not enough to convince Valverde to start him in every game, nor were they enough for Barcelona fans, who expected more from their record signing. Club captain Gerard Pique came out in Coutinho's defence when the attacker was booed against Rayo Vallecano.
"We have to accept the reaction of the fans – but from the inside we have to give him our support," Pique told Marca. "Philippe is having a good season. Obviously, his cost was very high so that means there are more expectations of his performance level. It is what it is."
After he scored against Manchester United in the Champions League, the Brazilian put his fingers to his ears, later claiming: "I have always been someone who respects everybody. The truth is that this [celebration] was for the people to see that I have to block out the sound in order to focus on a match or on my job so that it won’t affect me."
With just five league goals in 2018-19, Coutinho is seen as an expensive flop by many around Camp Nou, with supporters glad to see him off the books following his loan move to Bayern Munich.
His loan move to the Allianz Arena, with a view to a €120m permanent transfer, has been greeted much more positively, with even Borussia Dortmund's Julian Brandt feeling compelled to celebrate his arrival.
"Coutinho is an awesome player, I'm a big fan. He was fantastic at Liverpool. I think he played very well at Barcelona, too, even though he was under the microscope a bit more," Brandt told the Bundesliga's official website.
"He's a real boon for the Bundesliga. I'm delighted that such a player has decided to move to the Bundesliga."
That sentiment is shared by on-loan Hertha Berlin midfielder Marko Grujic, who knows Coutinho from his time at Liverpool. Grujic is even more in awe of the 27-year-old, who he believes is now the Bundesliga's best player – eclipsing even Marco Reus and Robert Lewandowski.
“It's a big thing for the whole Bundesliga to have the possibility to see Coutinho play now,” the Serbian told Bild.
“He is a special and exciting player, he does crazy things. He’s got incredible tricks and skills in his locker. I enjoyed every training session with him in Liverpool. He will be by far the best footballer in Germany.”
Coutinho will be able to have more success in his preferred position at Bayern. He will succeed the legendary Franck Ribery, a player who also become synonymous with cutting inside onto his stronger foot. Head coach Niko Kovac has utilised both a 4-2-3-1 and 4-3-3 with Bayern, meaning that he has plenty of options for his versatile new signing.
The Brazilian could be an option on the left wing, in midfield, or even in the No.10 role where James Rodriguez often impressed during his loan spell in Bavaria. Wherever he plays, Coutinho will make a difference and his new team-mates are expecting him to make an instant impact due to his outstanding ability.
“I don't think he'll need that much time to adapt to our system and ideas,” Lewandowski told Bild. “"I think he's the sort of player that can settle in without many problems. He is a top player. Such a player could be the difference in whether you win something or not."
Coutinho would have continued to win trophies had he stayed at Barcelona, but now, out of Messi's shadow, he can bag medals while also showing that he remains one of the world’s best players.
Written by Ronan Murphy for Goal.com
Top Stories