A man who had the nerve to beat up his neighbour's wife in a Lagos community, has been forced to care for her. 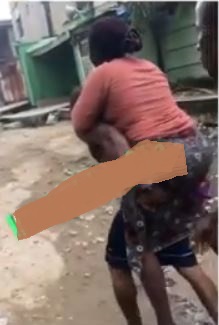 In what will come across as a really stunning development, a man has been made to pay for his actions after beating up his neighbour's wife in Lagos.

According to reports, the unidentified man had been annoyed by a comment the woman made about him, so he waited for when her husband was not around before entering the woman's room to beat her up.

When other neighbour's heard about what happened, they forced the man to carry the woman on his back to the hospital. They then handed him over to the police.

Watch video of the man carrying the woman below: