3 Killed, 10 Injured As Football Fans Clash Inside, Outside Stadium


A fight between rival football fans outside the National Stadium in Honduras has left four people dead and led to the suspension of the game. 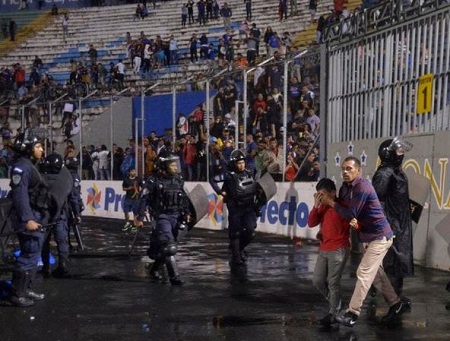 Three people have been killed in clashes between rival fans in Honduras, with former Celtic player Emilio Izaguirre among 10 people injured.

Violence broke out inside and outside the stadium before the derby between Olimpia and Motagua in Tegucigalpa, British Broadcasting Corporation reports.

Izaguirre, 33, was one of three players injured when stones were thrown at the Motagua team bus outside the stadium.

He later shared an image of himself sporting a dressing and said glass had damaged his eye.

In a post on Instagram, Izaguirre said it is "painful" to think of those who died in the clashes.

He played down his own injuries, saying some glass went into his eye but added it is "nothing serious" and "the danger is over".

Motagua shared images of the club's players being treated for injuries Izaguirre's team-mates Roberto Moreira and Jonathan Rougier were also injured in the attack.

The fixture was postponed as a result of violence, which saw police use tear gas to tackle rioters.

"Three people died and seven were shot and stabbed. One of them is a boy. Three of the injured adults are in critical condition," local hospital spokeswoman Laura Schoenherr told Reuters.

Motagua blamed members of the Ultra-Faithful Olimpia fan club, saying: "This has to be severely sanctioned by the authorities."

Izaguirre started his career with Motagua in 2003 before joining Celtic in 2010. He spent seven years with the Glasgow club before moving to Al-Fayha in Saudi Arabia, only to return to Celtic in 2018 for a further season.

In all, Izaguirre won seven Scottish Premier League titles with Celtic and returned to Motagua for a second spell this season.