How Thugs Attacked And Stopped Us From Searching Ambode's House - EFCC


The EFCC says its operatives were attacked by hoodlums loyal to Akinwunmi Ambode, former governor of Lagos, on Tuesday. 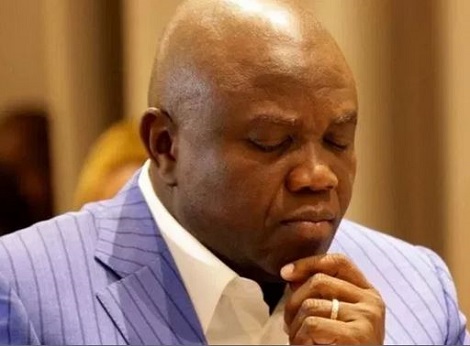 Akinwunmi Ambode
The Economic and Financial Crimes Commission has revealed how residents of Epe stopped its operatives from searching the house of former Governor of Lagos State, Akinwunmi Ambode, on Tuesday.

Sahara Reportershad reported that residents of Epe barred EFCC personnel from gaining access to the apartment.

The commission, however, claimed that hoodlums stopped its operatives and also attacked the convoy of its personnel, who went for the operation.

Head of Media and Publicity of EFCC, Wilson Uwujaren, in a statement, said though the commission obtained a legal and valid search warrant, it was unable to carry out the mission.

The statement reads, “The attempt by operatives of the Economic and Financial Crimes Commission to execute a search warrant on the residence of a former Governor of Lagos State, Akinwunmi Ambode, was on Tuesday August 20, 2019 resisted by hoodlums loyal to him.

“The thugs attacked the operatives and vandalised their vehicle.

“The commission had obtained valid warrant to conduct search on Ambode’s residences in ParkView, Ikoyi, and country home in Epe, as part of ongoing investigation of alleged malfeasance.

“However, the commission’s operatives were attacked and prevented from executing the search warrant in Epe by irate youths who injured three officers and damaged EFCC official vehicle.

“The attack was totally unprovoked as the commission’s operatives were civil and did not molest anybody.

“The commission, therefore, frowns at the attempt to manipulate the video of the search to create the wrong impression that officers of the agency molested residents at the Epe home of the former governor.

“It is also not true that the search was an attempt to plant foreign currencies in the home of the former governor.”
Top Stories