OMG! Bride Falls Inside Sea On Her Wedding Day While Trying To Ride Away On A Jet Ski (Video)


A bride has been caught on camera falling inside the sea on her wedding day while trying to ride away on a jet ski. 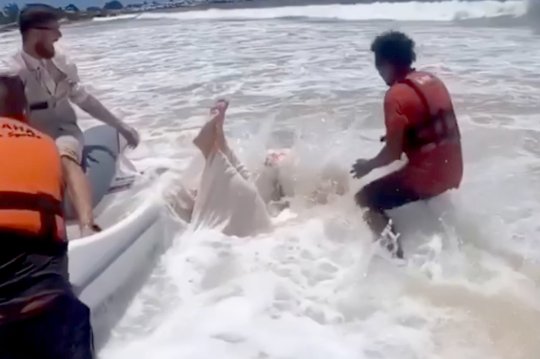 The bride fell into the sea
When you want the day to be perfect, it can be stressful when something goes wrong.
But some brides just embrace the mishaps as part of the story of their big day – like the bride who was covered in bird poo just before her photos.
Well, Aili Reierson wanted a stand-out moment during her wedding in Cancun, Mexico.
After marrying her partner Andrew, she jumped on the back of a jet ski he was driving – still wearing her wedding dress. But quickly it was clear the sea was a little rough as she was thrown from the back of the jet ski and completely submerged in the water.
The husband tried to catch her while onlookers ran into the sea to help, but it was too late and she end up soaked in seawater. But staying lighthearted, Aili simply stood up, with her bouquet still in her hand, wiped her eyes and made her way back to shore.
She told her guests she was fine but added: ‘These eyelashes need to come off.’
She posted the moment on her Facebook page saying: ‘You won’t want to miss this one. I had no idea that this was even caught on video.’

Her friends told her they couldn’t stop watching and laughing but told her she still looked amazing despite her impromptu swim. One friend told her she was ‘the coolest bride ever’.