One person has died and 10 others seriously injured after tanker exploded along Abuja-Kaduna Highway. 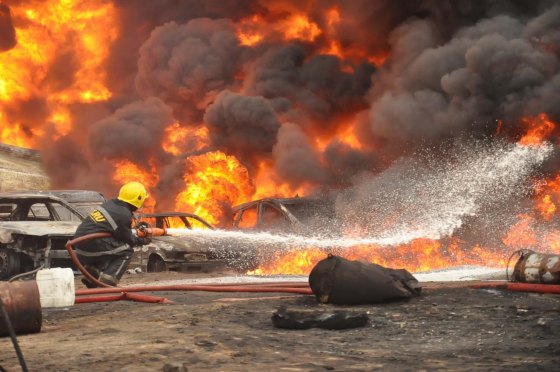 File photo
The Niger State Emergency Management Agency (NSEMA) has confirmed the death of one person while 10 others were injured in a petrol tanker explosion at Dikko-junction on the Abuja-Kaduna expressway.
Alhaji Ahmed Inga, the Director General of NSEMA, told the News Agency of Nigeria (NAN) in Minna on Saturday that the incident occurred at about 10:30 pm on Friday night and also resulted in the burning of several vehicles.
“We received a report from our Suleja Desk Officer that there was a tanker explosion and many people were affected.
“We cannot give the actual number of people that lost their lives, we will confirm that during our assessment; but from the report of our Suleja Desk Officer, one person died in the incident.
“Many people were injured and several vehicles were completely burnt,”he said.
He said that firefighters from the State Fire Service in conjunction with their counterparts in the Federal Fire Service were able to bring the fire under control around 4:30 am on Saturday morning.
Inga said the corpse of the deceased had been deposited in the morgue at Umaru Musa Hospital, Sabon Wuse, while those injured were also receiving treatment at the same facility.
Five killed, dozens injured in Algeria’s rap concert stampede(Opens in a new browser tab)
He said the agency’s officials would visit the scene of the incident to ascertain the cause of the explosion.
(NAN)
Top Stories