These are some of the most wanted persons who are currently hiding from Nigeria's security agencies. 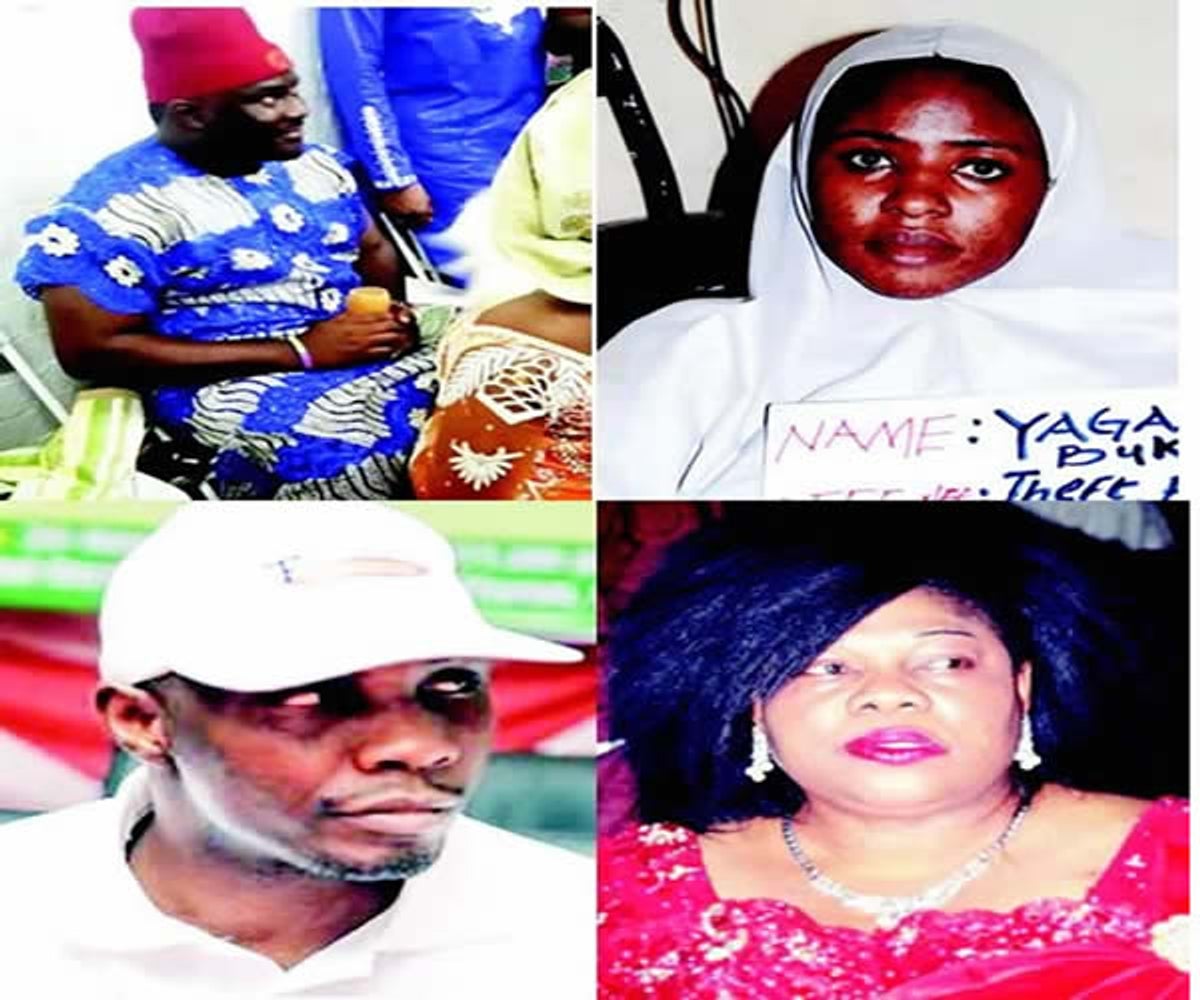 Some of the wanted persons
Last week, 77 Nigerians were arrested by the United States Federal Bureau of Intelligence for alleged involvement in business email compromise, romance scam and defrauding American citizens millions of dollars which were allegedly channelled through Nigerian banks.

The development has triggered the arrest of some local collaborators while the FBI and the Economic and Financial Crimes Commission have launched a manhunt for other accomplices. This development has swelled the list of Nigerians on the wanted list of security agencies. We bring to you 10 most wanted Nigerians including their foreign accomplices.

Wanted by the FBI for cyber crimes
The 31-year-old was named along with Chukwudi Igbokwe, 38, as the lead suspects in the three-year FBI investigation of romance scams, business e-mail compromise, wire fraud and money laundering. At the end of the investigation, about 80 Nigerians were indicted, with some of the accomplices still in Nigeria. Iro and Igbokwe’s role was to ensure the laundering of money deposited by a victim into a bank account or a money services account.

She is on the run for diverting N69bn public fund, and money laundering. The Former Chairman of Nigeria Social Insurance Trust Fund has been living in the shadows since she fled the country to evade arrest for allegedly diverting N69bn alongside a former Managing Director of the NSITF, Mr Umar  Abubakar. They were said to have stolen the money by awarding bogus contracts and through other financial malpractices. They allegedly committed the crime with Mrs Theresa Ittu
Affiong, a principal suspect in two cases of fraud, Adjunct Prof. Olufunmilade Adeyemi, Haruna Adamu Gazau, Jennifer Turnah, two Chinese, Liang Zhang, Junyuang Jiang, and Christopher Achebe.

Olejeme, hails from Asaba, Oshimili South Local Government Areas of Delta State and speaks English and Igbo languages ﬂuently, while her last known address was given as No 14 J.F. Kennedy Street, Asokoro, Abuja. Following her escape, the EFCC detained her sureties, a former president of the Nigerian Bar Association, Ikeja, Lagos State branch; Monday Ubani and Christopher Enai, an ex-senator representing Bayelsa State. They were subsequently granted bail by Justice Silvanus Orji of FCT High Court, Apo, in the sum of N50m, with two sureties who must be civil servants on Grade Level 15, after their lawyer, Mike Ozekhome, challenged their detention in court.

The EFCC declared the former Niger Delta militant leader, Government Ekpemupolo, alias Tompolo, wanted in February, 2016. The anti-graft agency in an advertorial signed by its Head of Media and Publicity, Wilson Uwujaren, said it declared Tompolo wanted following two bench warrants issued against him by a Federal High Court in Lagos, where he was charged with N45.9bn fraud.
He was said to have illegally diverted the money belonging to the Nigerian Maritime Administration and Safety Agency. The 50-year-old, dark-complexioned native of Okerenkoko, Gbaramotu Kingdom in the Warri South-West Local Government Area of Delta State, went underground and had not been seen since then.

His last known address was given as No. 1, Chief Agbanu Street, DDPA Extension, Warri, Delta State. The fugitive, who wielded political influence in his state, is said to speak both Izon and English languages.
Justice Ibrahim Buba of a Federal High Court in Lagos issued a bench warrant against Tompolo on January 14 after he shunned a summons dated January 12 issued on him by the judge to appear in connection with the fraud charges filed against him and nine others by the EFCC. Buba ordered the law enforcement agencies to produce Tompolo before him on February 8 for him to answer the charges, but rather than appear in court on January 8, he went underground after the court dismissed his application to quash the bench warrant and arrest order.

The EFCC filed 40 counts against Tompolo and nine others, including the immediate past Director-General of NIMSA, Patrick Akpobolokemi. The other suspects in the charge are Kime Engozu, Rex Elem, Gregory Mbonu and Capt. Warredi Enisuoh. They were charged alongside four companies, namely: Global West Vessel Specialist Ltd., Odimiri Electrical Ltd., Boloboere Property and Estate Limited and Destre Consult Ltd.

She is wanted by the EFCC for N1bn contract fraud.

Ittu is a principal suspect in two cases of fraud, contractual malpractices and obtaining goods under false pretence to the tune of N1bn and $1.4m, respectively. She allegedly received about N1bn from a government agency as payment for contracts which she failed to properly execute. Furthermore, the suspect was alleged to have fraudulently collected aircraft parts worth $1,416,000 from a Russian company and evaded payment.

The suspect failed to honour the EFCC’s invitation and is currently at large. The 50-year-old is fair in complexion. Her last known address was No. 2B Oko-Awo Close, Victoria Island, Lagos.

She is wanted for money laundering.

A bank worker, Aisha Shettima Nur, has also been on the run from the EFCC since 2016, for allegedly laundering money believed to be proceeds of crime.
In November 14, 2016, Nur was convicted in absentia on 10 counts of money laundering. Investigations revealed that the convict laundered monies which were proceeds of crime through the accounts of her siblings and daughter, as well as through the purchase of vehicles and stocking of a provision shop. While the cases were ongoing at both the federal and state High Courts, the convict had jumped bail, consequent upon which judges of both courts issued bench warrants for her arrest. The fair-skinned fugitive is 39 years old and 5.4 feet tall. She hails from Maiduguri, Borno State and is fluent in Hausa, Kanuri and English languages. Her last known address was No 1, Umar Galadima Street, Kawo, Kano.

She is declared wanted for $10m, N4m advance fee fraud and employment scam

Ugwah is wanted by the EFCC in a case of criminal conspiracy, employment scam and obtaining money by false pretence. The fugitive allegedly induced the petitioner to pay to her account $10m and another N4m for a fictitious Federal Government appointment. The fair-skinned fugitive is 62 years old and hailed from Owerri North Local Government Area of Imo State. She is fluent in English and Igbo languages. Her last known address was No. 20, Oladele Oke Street, Okota, Lagos.

He is accused of complicity in the misappropriation of N1bn SURE-P fund. Usman is wanted by the EFCC for alleged complicity in misappropriation of public funds, money laundering and abuse of ofﬁce. A popular contractor in Katsina town, Usman is the Managing Director of Idris Kwado & Sons Ltd. as well as Aminu Dikko & Sons Ltd.
According to the EFCC, the suspect was given a contract of N1bn by the immediate past governor of Kastina State, Ibrahim Shema, who is facing trial for alleged N11bn fraud. Dark in complexion, Usman, 51, is from Katsina Local Government Area, Katsina State. His last known address was Kwado Village, Off Ring Road, Katsina.

He is wanted by Interpol for cyber crime and hacking. Onetule, 34, was declared wanted by the International Police for allegedly hacking into a computer, theft committed by an organised group, and theft causing damage on a large scale. Onetule, born in Lagos, is 1.45 metres tall with grey eyes.

She is an Australian fugitive wanted for N20m forex fraud. Elya is wanted by the anti-graft agency in a case of criminal breach of trust and obtaining money by false pretence. The suspect allegedly collected N20m from the complainant, promising to help change the money to dollars. However, after receiving the money, all efforts to reach the suspect failed. Elya is 41 years old and dark in complexion. She speaks the English Language fluently. Her last known address was No. 11, Vernam Street, Maitama, Abuja

He is an Israeli who speaks Yoruba, English and Hebrew fluently. He is on the run for fraud and forgery.  Umansky was believed to have fled the country after he was indicted for obtaining money by false pretence, stealing, forgery and altering. The 57-year-old allegedly committed the crime alongside Hannah Sobowale and Hammed Ariyomi who are also on the run. Umansky’s last known addresses were Signature Suites, Asaba, Delta State and 52A, Tunde Adebola Street, Victoria Island, Lagos. Sobowale is 44 and her last known address was 100 Acres Church Street, Abere Bus Stop, Ajayi Egan Road, Atan, Sango-Ota, Ogun State. Ariyomi is 33 and his last known address was No. 6, Sanu Street, Adura Bus Stop, Alagbado, Lagos State. Both suspects are dark-complexioned, hailed from Ogun State and speak English and Yoruba Languages.
***
Source: Sunday Punch
Top Stories