Xenophobic Attacks: Why I Am Attending WEF In South Africa - Ezekwesili Replies Presidency


Ezekwesili in response to Ahmaad's tweet said she would be attending WEF because of citizens at risk in South Africa. 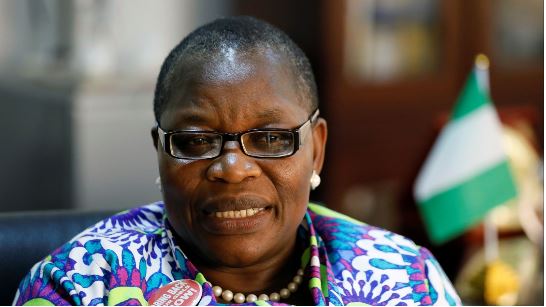 Oby Ezekwesili
Former Minister of Education, Oby Ezekwesili, on Wednesday came under attack following her decision to attend World Economic Forum, WEF, in South Africa despite Nigerian government’s withdrawal from the event.
DAILY POST reports that Nigeria had earlier announced the decision to boycott World Economic Forum on Africa billed for Capetown, South Africa, from September 4-6 over the xenophobic attacks.
Vice President, Yemi Osinbajo was to represent Nigeria at the forum.
But, Bashir Ahmaad, aide to President Muhammadu Buhari, on his Twitter page disclosed that Ezekwesili and some other Nigerians will still be attending WEF in South Africa on their own
He wrote: “Nigerian government has boycotted the World Economic Forum holding in Cape Town, South Africa, but some individuals from Nigeria including a former Minister are attending on their own.
“Madam Oby Ezekwesili, she is attending the WEF in Cape Town, South Africa.”
But, Ezekwesili in response to Ahmaad’s tweet said she would be attending WEF because of citizens at risk in South Africa.
She noted that she does not need Buhari’s government to decide her participation in WEF.
Ezekwesili on her Twitter page wrote: “Please send that aide to school to get proper education.
“Who told him that a private citizen like me needs their Nigerian government to decide my participation at WEF ? Imagine.
“I am doing more for our at-risk citizens.
“Who has time for their nonsense politicking with citizens’ lives?”
Top Stories