It would be recalled that Neymar and Pogba was heavily linked with a move to Real Madrid throughout the summer. 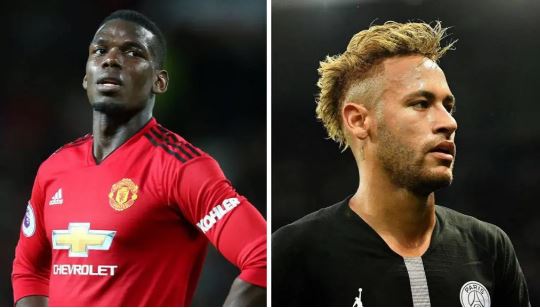 Paul Pogba and Neymar Jr
Real Madrid did not sign Paris Saint-Germain’s Neymar or Manchester United midfielder, Paul Pogba during last summer’s transfer window because the club’s president, Florentino Perez was reluctant to do more business after signing the likes of Eden Hazard, Luka Jovic, Ferland Mendy and many others.
According to Marca, Perez told the club’s board members and partners during a meeting on Monday that Man United refused to sell Pogba, while Neymar’s speculation came from the media, rather than the club.
The newspaper reports that the Los Blancos chief also stated that Real Madrid had never invested so much in players like last summer’s transfer window even though they already had a great squad.
It would be recalled that Neymar and Pogba was heavily linked with a move to Real Madrid throughout the summer.
The duo was among the six players Real Madrid manager, Zinedine Zidane and Perez agreed to sign last summer.
But both players, however, stayed put at their respective clubs after the transfer window.
Top Stories