Luck has finally ran out on three kidnappers who abducted a politician from Imo state. 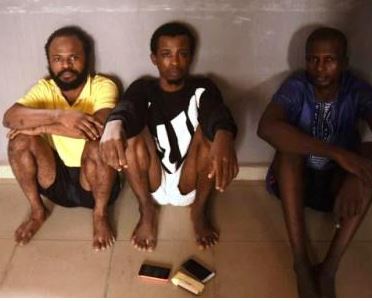 The three kidnappers
Three suspected killers of Imo politician, Christopher Anoruo were paraded by the Imo state police command after an investigation carried out by operatives of the Special Anti-Robbery Squad of the command indicated them.
In a press statement issued by the command, the commissioner of police in the state, Rabiu Ladodo confirmed the arrest of the suspects and disclosed that the politician from Egwe in Oguta Local Government Area of the state was taken about two poles away from his house where he was assassinated.
The statement reads thus;
The Imo Police Chief said: “On March 11, 2019, the Imo State Police Command received a report of robbery and assassination of one Christopher Anorue in Egwe, Oguta Local Government Area of the state. Hoodlums, numbering three, entered the house of the deceased, robbed members of the household of their valuables like phones and laptops, and abducted Christopher Anorue.
“They took him out and about two poles away from his house, they assassinated him. Following the report, I ordered an investigation into the matter. Through painstaking and discreet investigation, the phones of the deceased were traced to one Hassan Kabiru. When he was arrested, he said one Chimezie gave him the phone and when Chimezie was arrested, he said the phone was given to him by Solomon Onyemaechi.
“That necessitated their arrest and investigation is continuing into the case. The arrested suspects will be charged for robbery and murder.”
He also revealed that the suspects have made useful statements and would be charged at the conclusion of the investigation.
Top Stories