As many as eight foreign nationals who are working for Boko Haram have been nabbed by the Nigerian army. 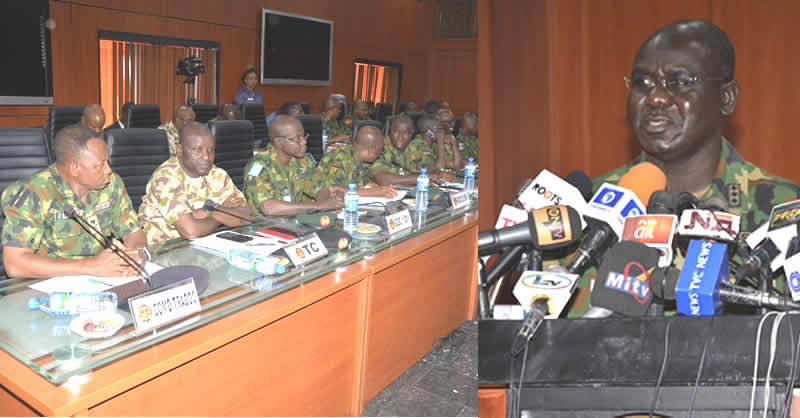 Chief of Army Staff, Lt-Gen Tukur Buratai addresses Army commanders on Wednesday at Army HQ, Abuja. Twitter image
Troops of the Nigerian Army have arrested a bus driver and seven passengers who are illegal immigrants and believed to be working for the Islamic State West Africa Province and the Boko Haram fighters along Yola Road in Borno State, Punch Metro reports.

The eight suspects were rounded up by troops of 331 Artillery Regiment deployed at a checkpoint along the road. The army identified only the driver as Musa Ibrahim.

According to a release from the army headquarters, Abuja, on Monday, the arrest was made between September 25 and 28, after troops also arrested one “notorious logistics supplier of the criminal insurgent group, Alhaji Kolomi Modu, at Ndollori area of Maiduguri.”

The army operations media coordinator, Col Aminu Iliyasu, said the troops on operations Lafiya Dole, Mesa and Swift Response would continue to conduct more arrests ahead of the 2019 yuletide season to deny criminals and bandits a freedom of action.

He said, “Within September 25 and 28, the troops deployed in the North-East continued to dominate the areas with aggressive fighting patrols and ambushes to fix and neutralise the fleeing Boko Haram and ISWAP elements.

“Troops of 25 Task Force Brigade in conjunction with some vigilantes arrested one Abubakar Musa, a suspected logistics supplier of the insurgents at Kumsem village in Damboa Local Government Area of Borno State. Items recovered from the suspect include 12 yards of black fabric suspected to be used for making of Boko Haram flags, a large quantity of drugs and some groceries.

“In a similar operation, troops of 27 Task Force Brigade acting on a timely intelligence arrested another logistics supplier of the insurgents, Mohammed Isa, at a checkpoint in Maina Hari. During preliminary investigation, the suspect confessed to his membership of Boko Haram in Kimba village in Biu LGA of Borno State.

“Similarly, the vigilant troops of 231 Battalion in conjunction with troops of 331 Artillery Regiment arrested a commercial driver, Musa Ibrahim, and seven passengers believed to be illegal immigrants from a neighbouring country. Suspects are believed to have links with ISWAP. Additionally, troops of 7 Division Garrison, in a joint operation with the Office of the National Security Adviser’s tactical team, arrested one notorious logistics supplier of the criminal insurgent group by name Alhaji Kolomi Modu at Ndollori area of Ajilari in Maiduguri.

“Preliminary investigations revealed that the suspect has been supplying premium Motor Spirit and other lubricants to ISWAP. In the same vein, troops of Headquarters Sector 2, Operation Lafiya Dole, intercepted a truck with Registration Number KA 462 YK conveying 800 bags of fertiliser along Damaturu-Potiskum road without permit. The suspected cargo is believed to be used by terrorists for making Improvised Explosive Devices.”
Top Stories