The world's second richest man, Bill Gates has talked about having Nigerian billionaire, Dangote as a friend. 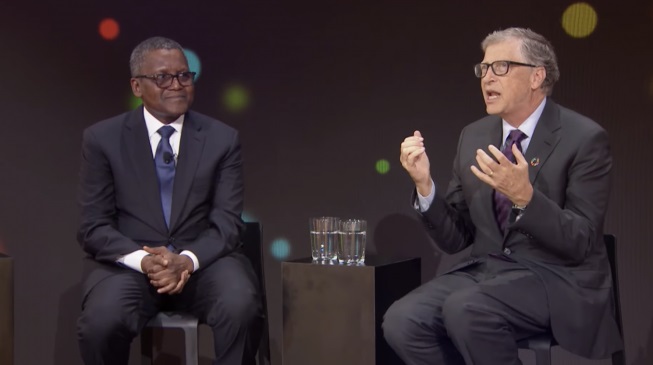 Dangote and Bill Gates
One of the world’s richest men, Bill Gates has said that he and his wife, Melinda are lucky to be able to call Africa’s richest man, Aliko Dangote, a friend.

He said this on Tuesday on his blog, Gatesnotes, in an article, which he titled, “How I cemented my friendship with Aliko Dangote.”

Gates said, “Melinda and I are lucky to have him as a partner (and friend!) in improving health.”

Sharing how they first met, the Microsoft founder wrote, “Have you ever met someone new and immediately felt like you could talk to them for hours?

“That happened the first time I met Aliko Dangote. A couple years ago, he and I ended up going to the same event in New York. A mutual friend suggested that I meet him because he knew we were both super interested in global health. So we made sure to sit next to each other at dinner.

“As soon as we shook hands, it was clear we had a ton in common. We both started successful businesses in the late 1970s. For our second act in life, we both chose to start foundations aimed at improving health and education. (Today, the Dangote Foundation is the largest such organization in sub-Saharan Africa.)

“More importantly, we both love to geek out over things that make some people’s eyes glaze over, like cement, fertilizer, and iodized salt.”

He added that their love for discussing these issues has been the driving force behind the desires of both their foundations to reduce malnutrition on the Africa continent, via the provision of fortified food items.

He concluded, “Improving health in Nigeria is critical to making progress in sub-Saharan Africa. The country is home to nearly a quarter of all people living in sub-Saharan Africa, and that population is only going to grow in the future. By solving problems in Nigeria, you can have a huge impact on all of Africa. Aliko Dangote understands this, and that’s why he’s committed to making progress in his home country.”
Top Stories