Mother of victim killed by husband hails him, says he put up with so much from her daughter. 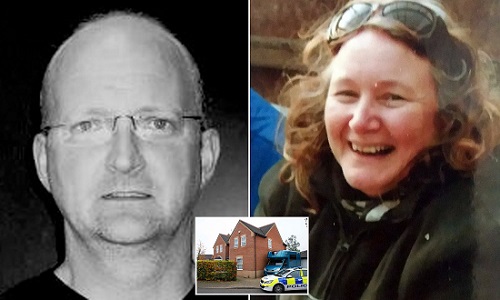 David Pomphret admitted to killing his wife, Ann Marie, November 2, 2018. PHOTO: The Sun UK
A British bank worker accused of murdering his wife with a crowbar “deserved a medal” forever putting up with her, his mother-in-law has told a court.

David Pomphret, 51, bludgeoned his wife Ann Marie, 49, after he finally “snapped” from all the abuse he suffered, Liverpool Crown Court heard.

Pomphret, a technology expert with Barclays, struck her head with the crowbar more than 30 times at the stables they owned near the home they shared with daughter Megan, 18, in Warrington, Cheshire.

He admits killing his wife on November 2, 2018 but denies murder on the grounds of a temporary loss of control, according to the Sun UK report.

Pomphret was a “quiet man” who finally “snapped”, the jury of seven women and five men has been told.

Carol Buckley, the victim’s mother, said in a statement read to the jury: “David was an angel. He deserved a medal for putting up with Marie.

“I could not have wished for a better son-in-law or dad for Megan.”

Ms Buckley’s statement said her daughter married the defendant in 1997 and they shared an interest in horses.

She described her daughter as the “driving force” in the relationship.

Ms Buckley also said her daughter could easily “take the huff”, blocking her on Facebook over something she had said, and that three years before her death she had been diagnosed with Asperger syndrome, which can affect a person’s social skills.

The Sun UK reported that Kenneth Crane, Ms Buckley’s partner, said in a statement: “Marie, I would describe as a Jekyll and Hyde character.

“She was like a volcano. She could erupt at any time without warning.

“I would describe David as a very quiet bloke. He would never talk or chat.”

On November 2, Pomphret rang 999 claiming to have found his wife lying in a pool of blood at the stables.

Pomphret told the call handler: “There is brain and blood everywhere, and it looks like she has had her head beaten in.”

According to The Sun UK report, he was arrested the day after and protested his innocence before being released.

The banker was re-arrested six months later and charged with murder.

A post-mortem examination concluded that Pomphret’s wife died from a violent assault, with severe head injuries caused by more than 30 blows to her head with a crowbar.

Gordon Cole QC, prosecuting, told the jury Mrs Pomphret’s death was not through a temporary loss of control by her husband but due to his “loss of temper”, adding this is a case of murder.
Top Stories