Six elephants drowned at a waterfall in Thailand while apparently trying to save a calf, according to national park officials. 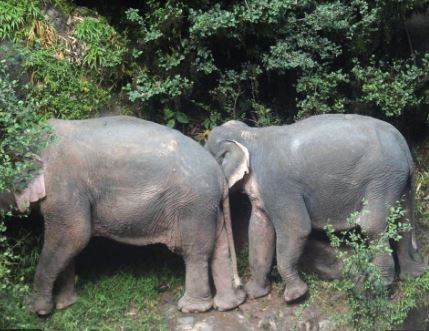 Six wild elephants drowned after slipping off a waterfall in northeast Thailand, authorities said Saturday, with two others saved after they became stranded while apparently trying to rescue one of those that fell into the current.

Officials in the northeastern Khao Yai national park were alerted to elephants “crying” for help at 3:00 a.m., the Thai Department of National Parks, Wildlife and Plant Conservation said in a statement.

Two of the elephants had apparently attempted to save one of those that fell, but they found themselves trapped on a thin, slippery sliver of rock above the churning waters.

Video showed another of the hulking animals struggling desperately to get back up to where the pair stood.

Park officials tossed food laced with nutritional supplements in an attempt to boost their energy and give them the strength to climb back up into the forest.

They later said the two had been rescued but were extremely distressed.

Parks department spokesperson Sompoch Maneerat said it was unclear what caused the accident.

“No one knows for sure the real cause of why they fell, but there was heavy rain there last night,” he told AFP.

The waterfall was closed to tourists as the rescue took place.

Elephants are Thailand’s national animal and live in the wild in parts of the country, but their numbers have dwindled to only a few thousand.

Deforestation has pushed the wild population into closer contact with humans in recent decades and away from their natural habitats.
Top Stories