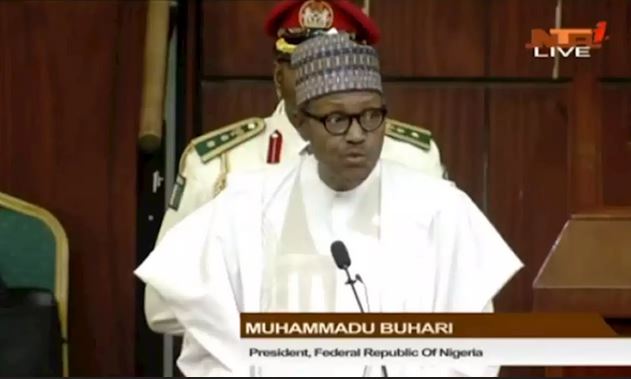 President Muhammadu Buhari
President Muhammadu Buhari accompanied by members of the Federal Executive Council (FEC) on Tuesday presented the 2020 budget proposal to a joint session of the National Assembly (NASS).
Buhari, who addressed the joint session of NASS at about, 2.03p.m., unveiled a budget of N10.33 trillion for the 2020 fiscal year.
The Federal Executive Council had proposed N10.007 trillion for the financial year but the figure was increased to N10.33 trillion by the National Assembly.
The president said the 2020 budget was designed to be a budget of “Fiscal consolidation to strengthen our macroeconomic environment; Investing in critical infrastructure, human capital development and enabling institutions, especially in key job creating sectors.’’
He added that the budget was meant for “Incentivising private sector investment essential to complement the government’s development plans, policies and programmes; and enhancing our social investment programmes to further deepen their impact on those marginalised and most vulnerable Nigerians.”
According to him, the total Federal Government revenue in 2020 is N8.155trillion comprising oil revenue of N2.64 trillion, non-oil tax revenues of N1.81 trillion and other revenue of N3.7trillion.
“This is seven per cent higher than the 2019 comparative estimate of N7.594 trillion inclusive of the Government Owned Enterprises,’’ he said.
The president said non-debt recurrent expenditure include N3.6 trillion for personnel and pension costs, an increase of N620.28 over the 2019 fiscal year figure.
“This increase reflects the new minimum wage as well as our proposals to improve remuneration and welfare of our police and armed forces,’’ he said.
He disclosed that N2.46 trillion was earmarked for capital projects, inclusive of N318.06 billion in statutory transfers.
Other estimates are N556.7 billion for statutory transfers; N2.45 trillion for debt servicing and provision of N296 billion as sinking fund.
He explained that the sinking fund would be used to “retire maturing bonds to local contractors”.
The 2020 budget is based on an oil production estimate of 2.18 million barrels per day, oil price benchmark of 57 dollars  per barrel and an exchange rate of N305 to a dollar.
Other benchmarks are: real Gross Domestic Product (GDP), growth rate of 2.93 per cent while inflation rate “is expected to remain slightly above single digits in 2020.”
On sectoral allocation, the president said the Ministry of Interior would get N35 billion as against N569 billion in 2019, Defence (N100 billion), Education (N48 billion) and Health (N46 billion) for some key spending.
He noted with delight the continued recovery of the nation’s economy as well as the increase in the foreign reserve from 23 billion dollars in 2016 to N42.5 billion dollars in August.
“This increase is largely due to favourable prices of crude oil in the international market, minimal disruption of crude oil production given the stable security in the Niger Delta region and our import substitution drive, especially in key commodities,” he explained.
-NAN
Top Stories