It has been revealed that a Lagos sweeper who died in the line of duty is yet to receive compensation six weeks after demise. 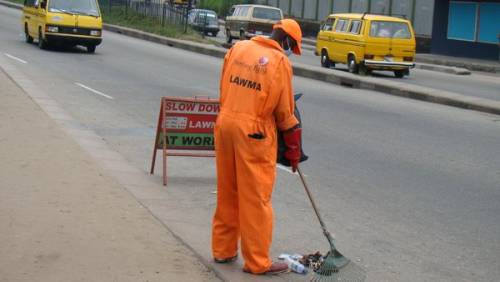 Road sweeper
Six weeks after street cleaner Folasade Ogunniyi was knocked into a lagoon in Lagos State while on duty on the Third Mainland Bridge, the family of the deceased has yet to receive the promised N45,000 compensation by Highway Manager, her former employers.
Ogunniyi’s body was recovered from the lagoon underneath the bridge on August 23, three days after she was killed by a hit-and-run driver. Until her death, the late sweeper, a mother of three, was employed by Highway Managers, an environment sanitation firm working in collaboration with the Lagos State government.
Before her death, she was earning N15,000 per month from the company, an amount even less than the outgone minimum wage of N18,000. To compensate her family for the loss and service she rendered for the 24 months of her engagement, Highway Manager said the family would be paid N45,000.
But Ogunniyi’s husband told The Guardian, “I was always going there (the office) and I kept being asked to come back. They (High Manager) told us that they are working on her death certificate and some other things. When it is ready, they said the insurance will be paid, but I have since resigned to fate."
Highway Manager’s head at Rowe Park, Yaba, Lagos, Rotimi Sotanmi, in his reaction, said: “We have communicated with the family and we are doing our part. The agreement is that we will continue paying her salary (N15,000) for three months.”
Sotanmi, however, told The Guardian that an unnamed insurance company had all the details and was working on making a substantial payment to the family.
Top Stories