ANALYSIS: In Bayelsa Politics, Is Dickson Pushing Jonathan Out Of Relevance?


Mr Jonathan is not just from Bayelsa, he was a deputy governor and governor of the state before he became Nigeria's vice president and later president in 2011. 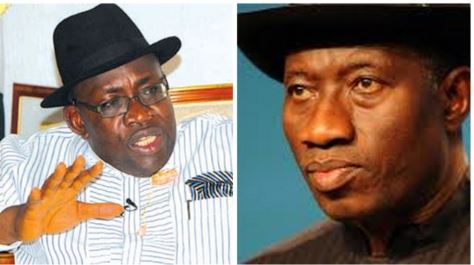 As the people of Bayelsa go to the polls on November 16 to elect a new governor who will succeed Seriake Dickson, there is a question about the influence of the former Nigerian president, Goodluck Jonathan, in the politics of the oil-rich state.

Mr Jonathan is not just from Bayelsa, he was a deputy governor and governor of the state before he became Nigeria’s vice president and later president in 2011.

Going by the character of the Nigerian politics, Mr Jonathan is a ‘big man’ who should be pulling strings, at least in his own state, to determine who gets what in the politics of the state. But he is not doing that. He appears not to be bothered about such, as well.

And that naturally comes with a price – disenchantment and withdrawal of goodwill from political supporters.

It is uncertain to what extent this may have contributed to the recent political upset against the former president in his own Bayelsa East Senatorial District, where the All Progressives Congress (APC), the main opposition party in Bayelsa, defeated Mr Jonathan’s Peoples Democratic Party (PDP) in the 2019 senatorial election.

Degi Wangagra of the APC is currently representing the district in the Senate.

Mr Jonathan is from Otuoke community in Ogbia Local Government Area of the state.

The Nation newspaper reported that the PDP almost lost in Ogbia Federal Constituency election as well, but for the effort of the current commissioner for information in the state, Daniel Iworiso-Markson, and other appointees of the state governor, Mr Dickson.

The paper described the PDP performance in Mr Jonathan’s Otuoke community as “poor”.

Jonathan ignored, pushed aside by Dickson?

There have been reports of a rift between Mr Jonathan and Governor Dickson over the just concluded PDP governorship primary in Bayelsa.

Although government officials in Bayelsa have dismissed it as being untrue, there are reports that Mr Jonathan was not consulted by Mr Dickson over the choice of Mr Diri as the man to succeed him as governor, and that the former president and his supporters felt let down by the governor.

Mr Jonathan’s kinsman, Michael Ogiasa, who was a special adviser on power development to Governor Dickson, recently resigned his appointment from Mr Dickson’s government, according to a report published by the Punch newspaper.

It is not clear if the resignation is in connection with the succession politics in the state.

The paper also reported the defection of the PDP chairman of Ward 8 in Brass Local Government Area, Intelligent Owei, to the APC.

The PDP national leadership on Friday set up a peace committee headed by the former president of the Senate, Bukola Saraki, to work towards the reconciliation of Messrs Jonathan and Dickson.

Wisdom Ikuli, a leader in the Ijaw Youth Council, is Mr Jonathan’s kinsman, as well as a strong political supporter of the former president.

Mr Ikuli’s remark during an interview with PREMIUM TIMES, on Saturday, somehow symbolised the way some people perceive the status of the relationship between Governor Dickson and Mr Jonathan.

“Does Dickson have any relationship with any leader in Bayelsa state, except those who are serving him or surviving from him?” Mr Ikuli told PREMIUM TIMES when asked about the relationship between the two leaders.

“Go and ask the people who introduced Dickson to A.J. Turner and Jonathan, and they will tell you what is happening.

“Dickson has deliberately relegated the great leaders who made him what he is today. He has messed up all these leaders,” he said.

“If we say he should be given that right, we are not asking for too much.”

Mr Ikuli, however, said this does not mean that Mr Jonathan’s influence has diminished in the politics of the state.

“I am sure that as a father to all, whoever emerges as the governor of Bayelsa State, he is going to support him.”

Daniel Iworiso-Markson, the commissioner for information in the state, dismissed the reports of a rift between the governor and the former president, saying that the relationship between the two remains “very cordial”.

In an interview published on Sunday by The Guardian newspaper, Mr Iworiso-Markson said it was unfair for people to be accusing Mr Dickson of sidelining the PDP elders during the PDP governorship primary. The governor, he said, consulted the former president and other party elders in the state several times.

Jonathan Obuebite, the commissioner for education in the state, supported that position. He said both leaders are enjoying the best of relationship. He likened the relationship between the two to that between a younger brother and the elder brother, with Mr Jonathan as the “elder brother” here.