Oh No! Plane Carrying A High School Swim Team Goes Off The Runway While Trying To Land


A plane which has carrying a high school swim team and many others has gone off the runway while trying to land. 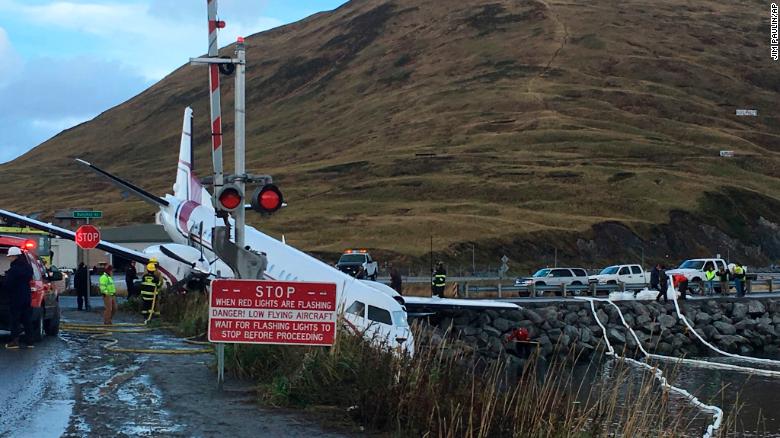 A commuter airplane crashed near the airport in a small Alaska community on the Bering Sea in Unalaska, Alaska.

A plane carrying 42 people, including a high school swim team, went off an airport runway while trying to land Thursday in Alaska.

PenAir Flight 3296 from Anchorage to the city of Dutch Harbor landed at Unalaska-Dutch Harbor Airport but went off the runway as it tried to stop, according to Alaska Airlines. An image of the incident shows the aircraft tilted down an embankment to a body of water.

"PenAir operates the Anchorage-Dutch Harbor service for Alaska Airlines with a Saab 2000 aircraft," the airline said in a statement.

The incident happened during a 5:40 p.m. (10:40 p.m. ET) landing, Alaska Airlines said. The plane went off the runway in the small Alaska community near the Bering Sea, more than 800 miles west of Anchorage.

Weather conditions at the time included light rain, a drop in visibility and sustained winds of 24 mph with gusts at 31 mph, according to CNN meteorologist Haley Brink.

The Alaska Department of Transportation and Public Facilities said it was notified about the incident shortly afterward.

It's unclear if there are any injuries. Three crew members and 39 passengers were on board, the airline said.

The superintendent of the school in Cordova, Alaska, where the swim team is from, told CNN that "all students and chaperones are accounted for and are OK.

"Moments ago, I spoke again with Superintendent Conwell who stated that the team was together, seemed fine, and were eating pizza. Mr. Conwell assured me repeatedly that the students would be well looked after and taken care of," Cordova Superintendent Alex Russin said.

The National Transportation Safety Board is sending a team to investigate the incident.