Some residents got the shock of their lives when they woke up to see an abandoned baby in Owerri. 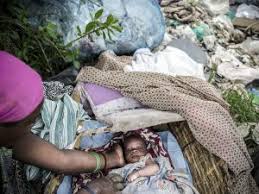 Sun News reports that the residents of Mechanic Village, Nekede woke up on Friday to discover that another unscrupulous mother had dumped her baby at a refuse dump site near the Otamiri River.

This was just as residents of the area have poured invectives on the yet-to-be identified mother.

This would be the second of such incident in the area in the past week.

One of the residents in the area, Donatus,  said he found the baby around 8.30 am when he went to the dumpsite to drop refuse.

“I found the baby at the refuse dump when I went there this morning. The head looked like something that was chopped off until some people decided to remove the sack bag that covered it. Whoever dumped the baby there must be a very wicked person,” he said.

He expressed surprise that a mother could throw away her baby, after going through the process of child birth, noting that babies are gifts from God, and should be cared for.

Another resident Juliet Maduabuchi said the baby which was presumably dead, should have been buried normally instead of being dumped in a refuse.