Potential Best Graduating Student And His Mom, Set To Be Buried


The spate of insecurity in Nigeria is getting worse with some assailants killing a mother and her son. 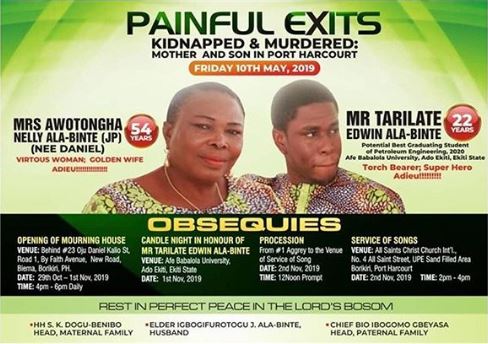 Afe Babalola University, ABUAD potential best graduating student and his mom are set to be buried after being kidnapped and killed despite ransom payment in Port Harcourt, Rivers State.

Mrs Awotongha Nelly Ala-Binte and Mr Tarilate Edwin Ala-Binte have been described as loving and easy-going people.  Tarilate was a potential best graduating student at the department of Petroleum Engineering at the Afe Babalola University, Ado Ekiti, Ekiti State.

They were murdered in cold blood after the kidnapped received some good money as ransom for their release. Kidnapping is one of the common crimes engaged in by youths desperately looking for quick cash. The police has been clamping down on kidnappers but much progress is yet to be made.

This latest heartbreaking news has elicited sadness and tears among people.
Top Stories