Exposed! How A Libya Returnee Bribed Official To Get The Documents For Stolen Cars


A Libya returnee has been nabbed after he reportedly bribed officials to get the documents for stolen cars. 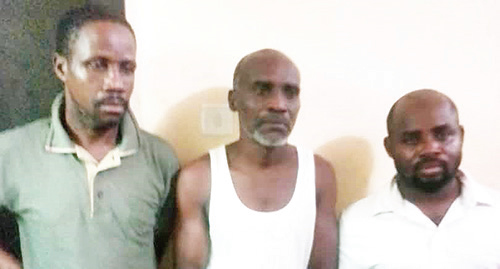 Joseph Akpan, a Libya returnee, has been arrested by the police for allegedly stealing cars from cab drivers.

According to Punch Metro, Akpan was apprehended alongside one Akpan Ini-Obong and Iboro Umoh, a civil servant in Akwa Ibom State, who allegedly assisted him to facilitate the documentation of the vehicles before they were sold out.

One other member of the syndicate, Emmanuel Unah, is said to be at large.

City Round learnt that the modus operandi of the ringleader, Akpan, was to engage a cab driver in Lagos or Ogun State to take him to an event.

He would offer the driver a drink laced with sedatives at the event and immediately the owner slept off, he would run away in the vehicle to the eastern part of the country to sell it.

Luck ran out on him recently when one of his victims, identified simply as Ibrahim, whose Toyota Camry salon car (2003 model) was stolen, reported to the Inspector-General of Police Intelligence Response Team.

The detectives were said to have trailed the three suspects to Akwa Ibom State and rounded them up.

A police source said Akpan on December 2018, asked Ibrahim to carry him to Ijebu-Ode, Ogun State, to attend a wedding and paid him N6, 000 in advance out of the N16, 000 the driver charged him.

On getting to the venue, he reportedly asked the driver to pack somewhere and that once the wedding was over, he would take him back to Lagos.

He was said to have brought some snacks and three bottles of alcohol for the driver after the wedding.

“He mixed a sedative with the drink and the driver slept off after taking it. (Akpan) tactically pushed him out of the car and dumped him beside the road and zoomed off with the car to the East. He was later tracked to Akwa Ibom State. His confession led to the arrest of two other accomplices and recovery of four stolen cars,” the source added.

Akpan said he went into crime after he was repatriated from Libya in 2018, adding that it was Unah, the fleeing suspect, who assured him of getting the stolen vehicles registered.

The 37-year-old father of two said his first deal was a sienna car stolen at a park sometime in September 2018 by one Paul and brought to him.

He said Unah introduced him to Umoh, an official at internal revenue service in Akwa Ibom, who helped him to re-register the vehicle.

He stated, “I am from Ikotepene, Akwa Ibom State. I sell men clothes in a container in a plaza in Uyo. I travelled to Libya in 2016 and was deported last year. When I returned to Nigeria, I met one Emmanuel Unah who told me that if I could get a stolen car, he would help me to procure vehicle documents and sell the car.

“Around September 2018, one Mr. Paul brought a sienna car to me and Unah and I took it to Uyo and Umoh helped us to procure the documents. I also got to know Ini-Obong who was Unah’s friend.

“I travelled to Lagos in December and I hired a taxi driver who took me to a wedding in Ijebu. I got a drink at the wedding and gave it to the driver. He has a glass cup in the car. As I was pouring the drink into the glass, I noticed he was not looking at me and I quickly put a drug that will make him sleep inside the glass cup. He slept off after drinking three bottles. I dumped him by the roadside and zoomed off.”

He said he took the car to Umoh for documentation and consequently sold it for N700, 000, adding that the official collected N150, 000 for procuring the documents.

Umoh, a native of Isitibom in Akwa Ibom State, said he registered about five cars for Akpan and Unah so far, claiming that he didn’t know immediately that the vehicles were stolen.

He said, “I am married with three children. I am a civil servant at the Internal Revenue Service in Akwa Ibom State and I collect N83, 000 per month. I registered one Toyota Camry for Mr Joseph Akpan for N50, 000. I also registered two other vehicles for him at N45, 000 each and two for Unah at the same amount.

“I gave them original documents because the number plates of the stolen vehicles they brought were old ones so it was very easy for me to register them because old numbers are not in the system. Initially, I did not know that they stole the vehicles.

“When I realised, I told them to stop bringing stolen cars to me for registration but Akpan threatened to report me to the authorities and that I would be sacked. I had no alternative but to save my job and continue with them.”

The third suspect, Ini-Obong, 44, said he helped Unah to sell a stolen car for N700, 000 and he was given N25, 000 commission. He added that he was intercepted by the police at the point of selling another stolen car Unah gave him.