Kogi Rerun: "Throw Out The Rascal And I Will Rebuild Your Image" - Adeyemi


Adeyemi said if given the chance he would do more to eradicate poverty and attract more development to his constituency. 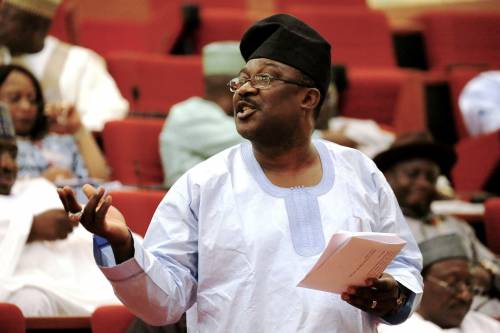 Candidate of the All Progressive Congress, APC for Kogi West rerun election, Senator Smart Adeyemi has called on the electorates to vote him in the November 16 senatorial election, said his mandate is to restore the battered image of the district.

Adeyemi also urged the people not to elect rascal, misfits, and people of questionable backgrounds into power.

Adeyemi who stated this on Tuesday during his flag-off campaign for the senatorial seat in Kabba, headquarters of the senatorial district, also begged for forgiveness from those who may have taken offense to his position in the past, said he has also forgiven those who offended him likewise.

He said politics is a serious business that must not be left in the hands of charlatans and street fighters, stressing that the people can no longer afford to submit their collective destiny to a trouble maker.

“Please forgive me if I have offended you in the past, I have also forgiven those who offended me. Let’s forge a new beginning.

“I will rebuild the Kogi west image and serve you with dignity. Vote for APC, APC is for development. Vote for me because I am a man of proven integrity.

“I went to the National Assembly and returned with national honour. My antecedents as a legislator and former NUJ President speaks for me. I will correct the mistakes and character of a man that claimed to represent us.”

Adeyemi, however, urged the people of the senatorial district to defend their vote so as not to have a repeat of the manipulation of 2015 and 2019.

While enumerating his achievements as a two-term senator, he said if given the chance he would do more to eradicate poverty and attract more development to his constituency.

“I sponsored up to 50 bills and 100 of motions. One of the bills is the establishment of revenue board for FCT that was left hanging for 15 years.  I built the stadium used for this rally in Kabba, I procured 22 ambulances and 100 of hospital beds and mattresses. The list is endless.

“Throw out the rascal, and I will redeem your image,” Adeyemi submitted.