A man has told of how his older daughter beat his 13-year-old daughter to death in a community in Lagos state. 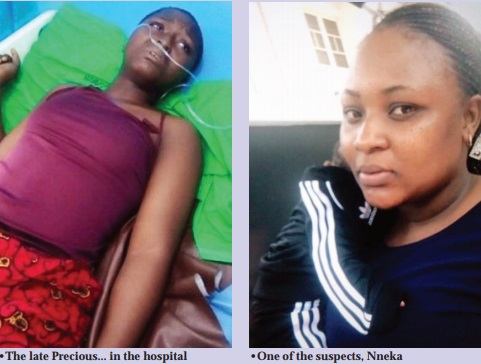 When a Lagos trader Mr. Emeka Omenka and his wife Ifeoma allowed their 13-year-old daughter Precious to visit her half-sister in Lekki, they never knew it was a decision they would regret the rest of their lives.

Precious, a Junior Secondary School (JSS) 3 pupil died on October 25 at the Federal Medical Centre (FMC) Ebute Metta from complications of the beating she allegedly received from her older half-sister Nneka and her mother Seki Eko on October 14.

According to the death certificate issued at the hospital, the primary and secondary causes of death were Acute Kidney Injury (AKI) and Cardiopulmonary Collapse.

According to the National Kidney Foundation, AKI is a sudden episode of kidney failure or kidney damage that happens within a few hours or a few days and causes a build-up of waste products in the blood, making it hard for the kidneys to keep the right balance of fluid in the body.

Other causes of AKI, the foundation said, are  decreased blood flow to the kidney caused by shock, clotting, bleeding or severe diarrhoea, severe allergic reaction, overuse of pain medicines used to reduce swelling or relieve pain from headaches, colds, flu, and other ailments.

The teenager went to Nneka’s house in Ikota, Lekki on October 12 on the latter’s request.

Omenka said his 13-year-old daughter was returned on October 16 looking weak with complaints of body pains. He said Precious gave details of how she was kicked in the stomach, chest and sides several times, adding that she was beaten with a mop stick and a cable as well. They tried to relieve the pains with analgesics and hot water massage.

“I am in pain,” he said. “My heart is broken. I do not even know where to start. I am finding it so difficult to understand how my older daughter and her mother beat up my girl so badly to the point that she died as a result of wounds she sustained. Nneka is my first daughter. I had her out of wedlock with one Seki Eko I was in a relationship with. She runs a beer parlour at Oluwole Market. But Nneka was trained by my wife Ifeoma who loved her like her own child.

“When I got married to my wife, it was difficult for her to conceive and so she brought up Nneka like her own child. So, when she came and said Precious should come to her place in Ikota, we did not have any reason to deny her request. Her husband lives in Dubai. She promised to send her to a private school to appreciate my wife for taking care of her.

“Precious went to her place on October 12. It was that weekend that it rained all through. Then, on October 14, which was a Monday, it also rained and Precious said she peed on the bed. That was her offence that made my daughter and her mother to descend on her like that.

“When they finished, they brought her back and dumped her at my place in Apapa Road, Ebute Metta. She was complaining of body pains and narrated what happened to her at her sister’s place in tears. I could not bear it and I wept as she was talking.

“My wife and I bought painkillers that we gave her. My wife was also using hot water and cloth to massage her body. We did not know that it was so bad. When we saw that she was not getting better despite the painkillers, we decided to take her to FMC because that’s where she was born.

“She was already stooling on her body and her mother was cleaning it. So, at the hospital, she was rushed to the emergency room after the doctors said she was short of blood. They did so many tests and scans and discovered that she was bleeding internally and that her bladder burst too.

“She was in the hospital some days and was booked for emergency surgery. I was busy running around to raise money to save my daughter’s life. I even borrowed from friends and family members so that she could be saved but at last we lost her.

“Nneka did not tell me what happened to my daughter and did not even come to the hospital until her relative from her mother’s side who works at the FMC called her to rebuke her. That was when she came and spent about N14,000 on my daughter’s drugs that day.

"I did not go to the police station then because I was busy running around for my daughter to be alright. But after she passed on…my kinsmen  advised I  report at the station. I went to Denton Police Station and Iponri but they told me it did not happen in their jurisdiction and that I should go to Lekki to report.

“I just sent a message to her husband and told him what she did. My wife has been inconsolable since then.

“I want justice for my daughter. I feel very disappointed that this happened to my family. I want human rights to come and government to investigate this case. Nneka is my daughter but Precious is also my daughter and she did not deserve to die like that,” he said.

The mother of the deceased told our correspondent she was still in shock over the incident, denying insinuations that Precious might have been ill.

She said: “My daughter was very healthy and even cooked for her younger ones that day before following Nneka. Nneka and her mother should explain what happened to my daughter. Nneka was brought to my house when she was 17 and we trained her in the university. I never did any wrong to her and then, she chose to pay me back this way?”

Our correspondent contacted Nneka for her reaction to the allegation and she said she would call back because where she was in a noisy place. After 90 minutes, our correspondent called again but she asked, “Who gave you the information? I cannot answer you if you do not say who gave you information. If you are recording me, I am recording you too and we all have our exhibits.”

Later, a woman, Tolu Fagbayila who said she was Nneka’s manager and public relations person called but declined to give her client’s side of the story.

She insisted on a physical meeting for a way forward.

Our correspondent told her a physical meeting was not necessary and that Nneka’s reaction could be sent through email, WhatsApp or SMS by the lawyer or anyone speaking on her behalf but that was not done.

Nneka reportedly told those around her the teenager died as a result of ruptured appendicitis, adding that the girl was ill before she took her to her house.

Efforts to reach her mother Seki Eko on her telephone number were unsuccessful. Meanwhile, a coalition of child advocates has signified interest in the matter following The Nation online report of the case.

Mr. Omenka told our correspondent that the advocates have contacted and interviewed him, adding that they also volunteered to take over the case and ensure justice.

Sources at the police station said an order to exhume the teenager’s body would be sought so that autopsy could be conducted.

Police spokesman Bala Elkana confirmed the case was reported at Ajiwe Division in Ajah, adding that the suspects have been arrested.

He said, “The father of the girl reported the incident at Ajah Police Station. He said he has since buried the girl. We have arrested the suspects and the case has been transferred to homicide section of State Criminal Investigation and Intelligence (SCIID) Yaba.”