The Portugal international forward looked far from happy to be taken off, but his manager has played down the incident. 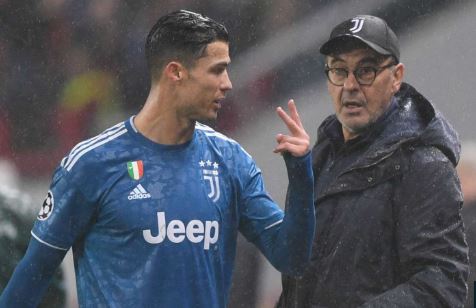 Juventus boss Maurizio Sarri says Cristiano Ronaldo’s angry reaction when being substituted against Lokomotiv Moscow was because he had sustained a minor injury.

The former Real Madrid forward was taken off for Paulo Dybala in the 82nd minute of Wednesday’s Champions League match in the Russian capital.

It is the first time the Portugal international has failed to complete 90 minutes in a Champions League game since February 2016, and he did not take it well.

Ronaldo was clearly frustrated as he made his way off the pitch, exchanging words with Sarri before making his way to the bench.

The game was still level at 1-1 at the time, though Juve would go on to secure all three points thanks to a stoppage-time strike from substitute Douglas Costa.

Speaking after the game Sarri played down Ronaldo’s reaction, insisting he was frustrated because he had suffered a minor knee problem.

"Ronaldo was angry because he wasn't very well, he had a knee problem a few days ago and his adductor got tired," said Sarri.

"At the end of the first half he was nervous. I was afraid he would hurt himself and I preferred to take him off."

To add to Ronaldo’s frustrating evening, he missed the chance to break the record for scoring against the most clubs in the Champions League.

He was unfortunate not to do so, however, when his third-minute free-kick was tapped in by Aaron Ramsey on the line to deny the former Manchester United star the opening goal of the night.

Aleksey Miranchuk equalised for Lokomotiv Moscow before half-time, but Costa’s late winner secured the Bianconeri’s place in the knockout stages.

Sarri admitted his side were far from their best but praised the team’s character for eventually coming away with the victory.

"It was not one of our best performances," added the former Chelsea boss. "It was very stop-start, even though we knew that they would set up like this.

"The first half was too open and in the second we had too many players above the defensive line. We risked too much. But the team wanted the victory at all costs and achieved it."