A van belonging to the NSCDC has been burnt after an official of the corps killed a keke driver for overtaking their van. 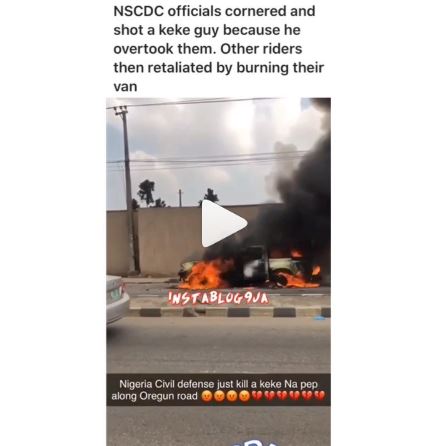 NSCDC official kills keke driver
A van belonging to the Nigeria Security and Civil Defence Corps has been burnt after its official reportedly killed a commercial tricycle rider along Oregun Road, Ikeja, Lagos, on Saturday.
It was learnt that the trigger-happy official was in an operational van together with his colleagues when the incident happened.
They were said to have accused the rider, whose identity has yet to be identified, of overtaking their vehicle. They reportedly disembarked from the vehicle, accosted the rider while one of them shot him.
It was gathered that angry youths confronted the officials who fled and abandoned the van at the scene. The vehicle was later set ablaze.
In a short video of the incident posted on Instagram on Saturday, a man was heard protesting against the shooting in Pidgin English. He claimed the keke driver died after being shot.
“Civil defence na im kill keke Napep (rider). We don burn their pick up,” he boasted.
Another voice in the background was heard saying “because he overtook them.” The video also revealed the burning van as a crowd gathered around the victim.
However, the spokesperson for the NSCDC in Lagos, Kehinde Badah, claimed that the keke driver was shot in the leg but did not die.
She said, “Something like that actually happened but I don’t have the details yet. I was told that the incident is being investigated. The person that was shot in the leg is not dead.”
Watch video below: