A 17-year-old boy who damaged his lungs with excessive smoking has become the first person to receive double lung transplant. 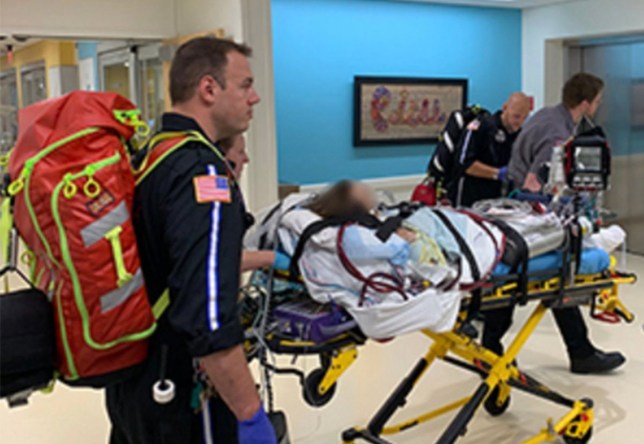 The teenager pictured being taken into hospital after his lungs failed (Picture: Henry Ford Health System)

A teenager in the US is believed to be the first person to have had both lungs removed as a result smoking e-cigarettes.

The Henry Ford Health System said it is ‘the first double lung transplant in the world for a patient whose lungs were irreparably damaged from vaping.’

The patient, who turned 17 while in hospital, is said to be doing well and has a good prognosis although recovery is expected to be long and intense.

He was admitted to hospital in September with suspected pneumonia, but doctors found an ‘enormous amount of inflammation and scarring’ on his lungs.

In early October he was taken to the Henry Ford Hospital in Detroit and the transplant was performed on October 15.

Surgical director of thoracic organ transplant Dr Hassan Nemeh said: ‘This is an evil I haven’t faced before. The damage that these vapes do to people’s lungs is irreversible. Please think of that – and tell your children to think of that.’

The teenager’s family said in a statement: ‘We asked Henry Ford doctors to share that the horrific life-threatening effects of vaping are very real.

‘Our family could never have imagined being at the centre of the largest adolescent public health crisis to face our country in decades.

‘Within a very short period of time, our lives have been forever changed. He has gone from the typical life of a perfectly healthy 16-year-old athlete – attending high school, hanging out with friends, sailing and playing video games – to waking up intubated and with two new lungs, facing a long and painful recovery process as he struggles to regain his strength and mobility, which has been severely impacted.’

It is not known what the boy vaped, but said the damage was so severe he was close to death and was immediately put at the top of the transplant waiting list.

In the UK, cardiologists have said that action needs to be taken to prevent an entire generation becoming addicted to nicotine.

They have published new research suggesting vaping could damage the brain, heart, blood vessels and lungs.

Experts said young people must not be allowed to get hooked on e-cigarettes, as vaping rates, particularly in the US, continue to rise.

The warning comes after Ewan Fisher, 19, from Nottingham, told how he almost died from serious respiratory failure after vaping.

Lead researcher of the new study, Professor Thomas Munzel, from the department of cardiology of the University Medical Centre in Mainz, Germany, said e-cigarettes are so dangerous, as well as addictive, that countries should consider banning them.

He and his colleagues also argued there is a ‘paucity of evidence’ to support claims that e-cigarettes are a ‘healthy’ alternative to smoking or that they help people quit.

This is in direct contrast to the advice issued by Public Health England (PHE), which stands by its claim that e-cigarettes are 95% less harmful than smoking.

The new study, published in the European Heart Journal, looked at the effect of e-cigarette vapour on blood flow and stiffness in the brachial artery in the upper arm in 20 smokers before they vaped an e-cigarette, and then 15 minutes afterwards.

Some 151 mice were also exposed to e-cigarette vapour over one, three or five days, for 20 minutes six times a day.

The results suggested that just one vaping episode increased heart rates and caused the arteries to stiffen, and that the inner lining of the arteries, the endothelium, stopped working properly in smokers.

In the mice, blood vessels, including those in the lungs and the brain, appeared to become damaged.

Prof Munzel said: ‘Our data may indicate that e-cigarettes are not a healthy alternative to traditional cigarettes, and their perceived ‘safety’ is not warranted.

‘In addition, we still have no experience about the health side effects of e-cigarettes arising from long-term use.

‘The e-cigarette epidemic in the US and Europe, in particular among our youth, is causing a huge generation of nicotine-addicted people who are being endangered by encouragement to switch from traditional cigarettes to e-cigarettes.

‘Research like ours should serve as a warning about their dangers, and aggressive steps should be taken to protect our children from health risks caused by e-cigarettes.

‘We cannot allow an entire generation to become addicted to nicotine.’

Studies from the US suggest more than 3.6 million children there use e-cigarettes.