Nigerians have slammed the Nigeria Television Authority after its abysmal coverage of Nigeria vs Benin match yesterday. 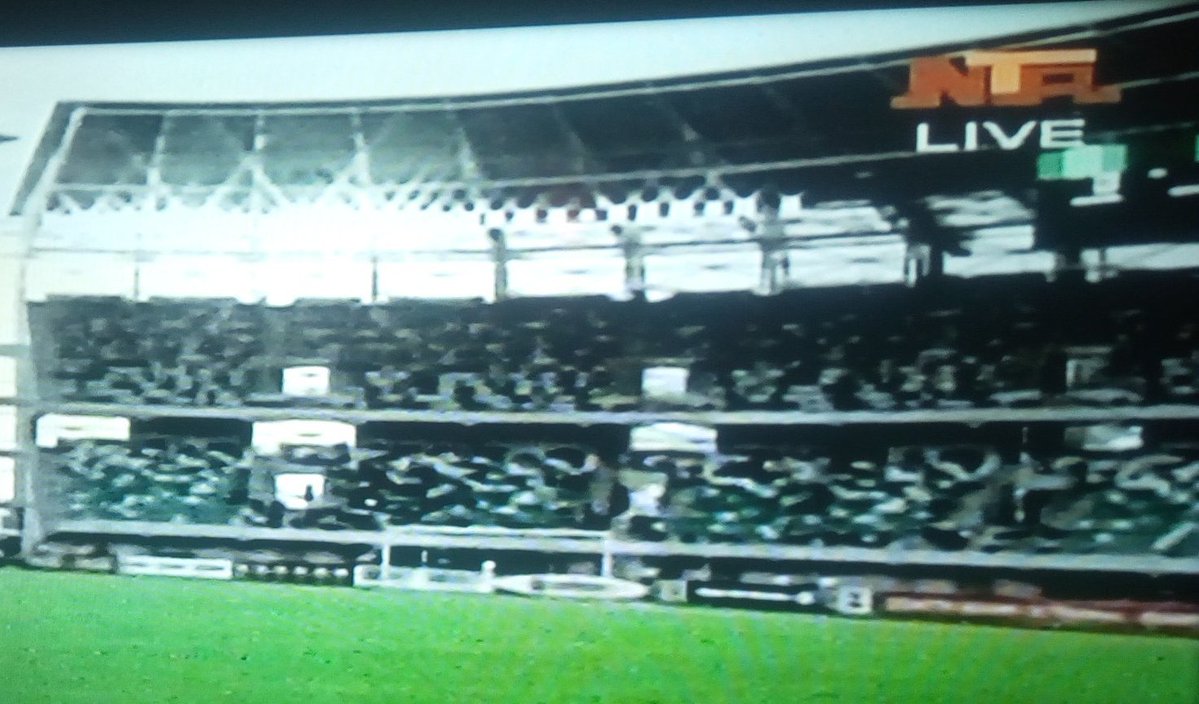 NTA's coverage of Nigeria vs Benin yesterday
The Nigeria Television Authority (NTA) has been described as a national disgrace after its poor coverage of Wednesday’s Africa Cup of Nations match between Nigeria’s Super Eagles and the Squirrels of Benin Republic.
This comes after South African cable sports channel Supersport had days back announced that they would be unable to continue broadcasting any Confederation of African Football content following the sudden cancellation of the deal between the continent’s football governing body and French company, Lagadere Sports.
The deal worth $1 billion was cancelled according to what CAF termed “breach of contract“.
Since then, Supersport has not aired the ongoing U-23 African Cup of Nations in Egypt and also did not air the Super Eagles game; a development which left many to rely on NTA to watch the AFCON qualifying match.
While trying to fill the vacuum, NTA decided to beam the live event, but it was an abysmal show because of the poor quality of pictures, graphics and commentary from the NTA team.
The camera angle was so poor that one couldn't see the players at the other far end of the pitch because the NTA crew members showed the match from the linesman's stand.
Nigerians used the hashtag #ShameOnNTA to show their annoyance:

My phone camera would surely do better than this 😭😭
Shame shame shame #ShameOnNTA pic.twitter.com/C94mw4lYrQ

Thank God for Dstv oh, watching the super eagles game now on NTA doesn't make me feel like this is 2019, it's looking like some 1999 shii 😂😭 #NGABEN #ShameOnNTA pic.twitter.com/41EUP9SR34

NTA has killed me. The man is so pained🤣🤣🤣🤣🤣 #ShameOnNTA
Get someone to translate the Yoruba🤣😂 pic.twitter.com/K2Fo8zx0Q5

According to the commentator Iwobi is still an Arsenal player. I'm done with NTA. #ShameOnNTA

Imagine listening to @NTANewsNow
commentary of the #NGABEN match and hearing @alexiwobi
is still an @Arsenal player. And this commentator will collect his salary at the end of the month? #ShameOnNTA

Refree blew the whistle..... Nigerias commentator did not hear he just saw movements .....so he said im believing thats the end of the match😂😂😂😭😭 #NGABEN #ShameOnNTA pic.twitter.com/Qv8C6G5v4W

By now we for don dy see keyboard warriors analysis;
"Iwobi is too lazy",
"Rohr is another Valverde",
"Osimehn is the best thing after Nigeria jollof",
yen yen yen😂

Do you know why nobody is analyzing the Super Eagles match today?

I know NTA fucked up but the commentary by this guy really cracked me up#NGABEN #ShameOnNTA pic.twitter.com/wy1RXvXo2o

Someone said that nokia C2 would have a better graphical display #ShameOnNTA pic.twitter.com/nN5gdO6srY

Me: what's the scoreline

So during Nigeria match, the commentator said IWOBI is an arsenal player😅

He then said Super Eagles 2 Nigeria 1.. Baba is high on Ijebu weed😂😂#ShameOnNTA pic.twitter.com/ahnNm3gFbI