A fuel-laden truck had gone up in flames after it was involved in an accident said to have resulted from brake failure. 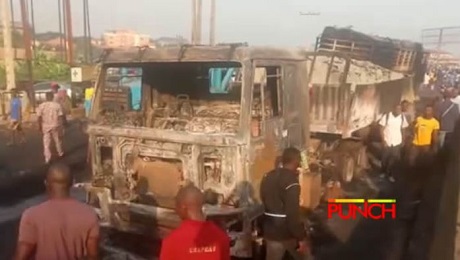 Ogun State Governor, Dapo Abiodun, on Friday shed tears when he saw the injured victims of the tanker fire accident at the old Sango toll gate on the Lagos-Abeokuta Expressway in Sango/Ota, Ado-Odo/Ota Local Government Area.

According to the Federal Road Safety Corps, six people were injured, while two properties were razed.

Abiodun wept when he sighted the victims who sustained various degree of burnt injuries.

While commiserating with the victims at the state hospital, Abiodun said the planned takeover of the road by both the Ogun and Lagos state governments would put an end to “the unnecessary loss of lives and properties” in the area.

Abiodun ordered the transfer of the victims to tertiary healthcare facilities in Lagos and Abeokuta, promising to pay their medical bills.

A fuel-laden truck had gone up in flames after it was involved in an accident said to have resulted from brake failure.

Abiodun urged the Federal Government to reconstruct the road to stem the incessant accident in the axis.

He said, “I am most distressed by the news of the midnight inferno at the Sango toll gate, which was the result of an accident by a fuel-laden truck.

“It is heart breaking that many lives were lost, in addition to properties running into millions of naira.

“This sad occurrence has made our quest to take over the management of this road more compelling. The incessant road mishap around the toll gate axis is avoidable.

“While I commiserate with those who lost their loved ones and property, we shall do everything humanly possible to forestall future recurrence.

“May I use this opportunity to once again plead that the Federal Government should approve the request of both the Ogun and Lagos state governments to take this all-important Lagos-Ota-Abeokuta expressway over,” he said.