Some journalist observers within this period, suffered the beating of their lives in the line of duty. 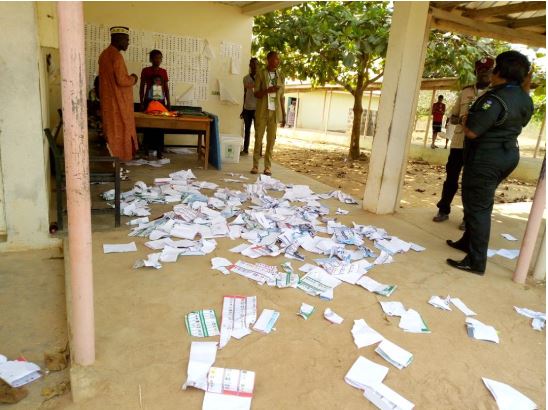 A polling unit in Kogi

The ongoing governorship elections across the 21 Local Government of Kogi State including that of Kogi West Senatorial election has been marred with ballot box snatching, vote buying, beating of journalists and observers by suspected political thugs.

DAILY POST gathered that, there was disruption of the election process at Lokoja Club Close to A Division as some fully armed thugs dressed in Police uniform invaded the polling unit to cart away the ballot box to an unknown place.

Similar incident played out in Crowder Memorial College, LGEA Secretariat Open Space, NEPA, LGEA Primary School Ganaja, Kabawa Area open Space, Adankolo, Open Space Miami Market all in Lokoja as journalistsd and observers who were on ground to cover the election all scampered for safety when the armed men arrived the polling units without resistance by security agencies on ground.

Some journalist observers within this period, suffered the beating of their lives especially those caught making attempt to cover their nefarious activities using Camera, and Smart phone.

DAILY POST also gathered that the election across the 21 LGA recorded massive vote buying as voters were induced with money ranging from N500, N1,000, N3,000 and N5,000 respectively.

In other areas in Kogi West, aside Lokoja Local Government Area, there was heavy shooting at Ayetoro ward 1 unit 004 where Dino Melaye voted this morning.

Less than an hour after he left the voting unit, some hoodlums in two Hilux vans and a Honda Civic stormed the place, shooting into the air and targeted the ballot box.

The ballot box was eventually taken away while some boys in the community chased the vehicles with no success. In the East, there were shootings and snatching of ballot boxes in some polling units in Dekina Local Government Area.

Some of the areas affected are CMM Primary School, Eti Aya ward 1 Anyigba, and Yale. Sources said voting were going on well when thugs shot sporadically and hijacked the ballot boxes and left with them.

It was learnt that voters scampered for safety.

Similar incident was also recorded in other LGA’s such as Ofu, Ankpa, Olamaboro LGA where it was gathered that phones of journalists and observers were seized by a particular party agent to prevent them from recording the election process.

Meanwhile, Gift Omoniwa, Executive Director, Search for Common Ground, who is an observer escape death by the whiskers. The Executive Director was on election observation in Ganaja polling unit when hoodlums held her hostage, and attacked her vehicle.

It took the intervention of good Samaritans and security agencies to rescue her from the hands of her attackers.

According to report available to DAILY POST, Gift Omoniwa, was attacked when she drove a Siena bus alongside his team to the polling units without following due process.